By ROCCO PARASCANDOLA and LEONARD GREENE 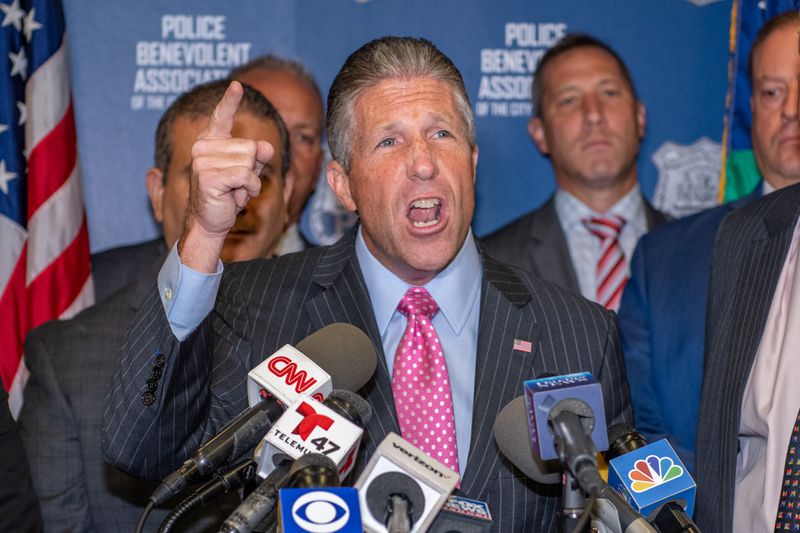 An administrative judge’s decision to fire Officer Daniel Pantaleo over the 2014 chokehold death of Eric Garner has “frozen” the city’s police department, the head of the city’s largest police union said Friday.

“They’ve taken your power away,” a passionate Lynch said at a Manhattan news conference. “To say a police officer doing his job was reckless will freeze this police department. The police department is frozen.”

Lynch drew a line in the sand, offering his own recommendation to the rank and file. He said if Pantaleo is fired, he will instruct cops faced with a suspect who is resisting arrest to call a supervisor or emergency services, and avoid any harm to themselves or their careers.

Lynch called the recommendation “a horrendous decision” that would be a mistake for Police Commissioner James O’Neill to follow.

“He will lose his police department,” Lynch said of the commissioner.

Lynch accused the judge of ignoring the evidence and trampling Pantaleo's due process rights. He said the decision tells officers that they're expendable.

“A police officer has no other choice but to enforce that law,” Lynch said. “We can’t just walk away. It’s not called de-escalation it’s called doing your job.

“The decision that was passed down today saying this police officer was reckless was ludicrous,” Lynch said. “We’ll be considered reckless every time we put our hands on someone.”

Lynch was joined by Pantaleo’s lawyer, Stuart London, who said the now-suspended cop was “disappointed”by the recommendation.

“He wants to fight going forward,” London said. “He was obviously not happy with the decision. He’s a strong individual. He understands this was going to be the toughest road because of politics.”

Lynch acknowledge the Garner family’s suffering. But he said police officers have suffered, too.

“Cops are in the position of protecting themselves rather than protecting you,” Lynch said.