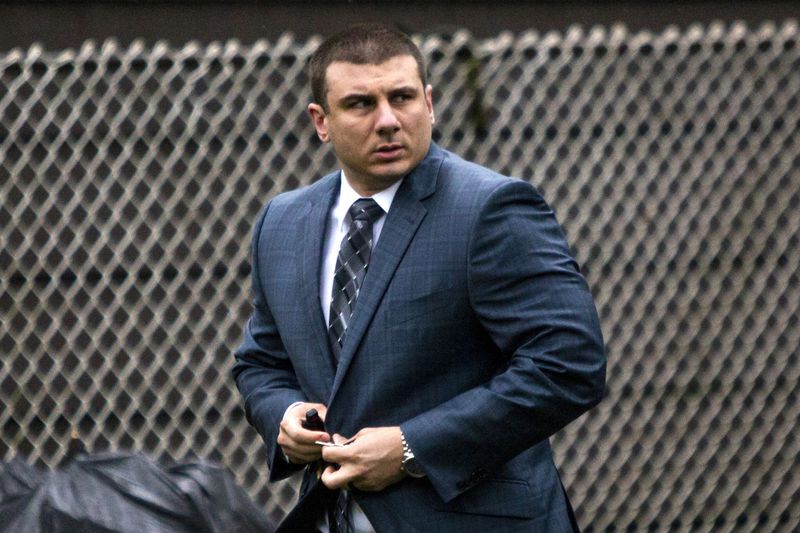 More than five years after a confrontation over the alleged illegal sale of one cigarette led him to put Staten Island man Eric Garner in a fatal chokehold, NYPD officer Daniel Pantaleo was fired Monday by police commissioner James O’Neill.

“The unintended consequences of Eric Garner’s death must have consequences of its own,” O’Neill said at a news conference at police headquarters in Lower Manhattan. “It is clear that Daniel Pantaleo can no longer effectively serve as a New York City police officer.” 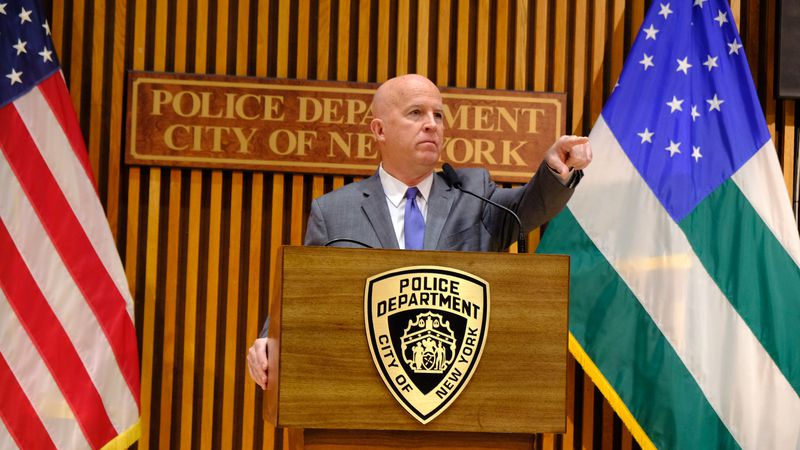 At a rally outside 1 Police Plaza, Garner’s mother, Gwen Carr, expressed no pity for Pantaleo over his firing.

Mayor de Blasio, at his own news conference, said what happened to Garner should never happen again.

“Today we are finally seeing justice done,” the mayor said. “Today we saw the NYPD’s own disciplinary process act fairly and impartially.”

Pantaleo’s lawyer, Stuart London, said the fired officer — who joined the NYPD in 2006 — will file an appeal to get his job back.

Police Benevolent Association Patrick Lynch and London said they had received an offer from the city that would have let Pantaleo keep his full pension if he agreed to leave on his own — but that the offer was later pulled, leaving Pantaleo with a pension based only on his personal contribution. Police spokeswoman Devora Kaye confirmed a pension deal was discussed. 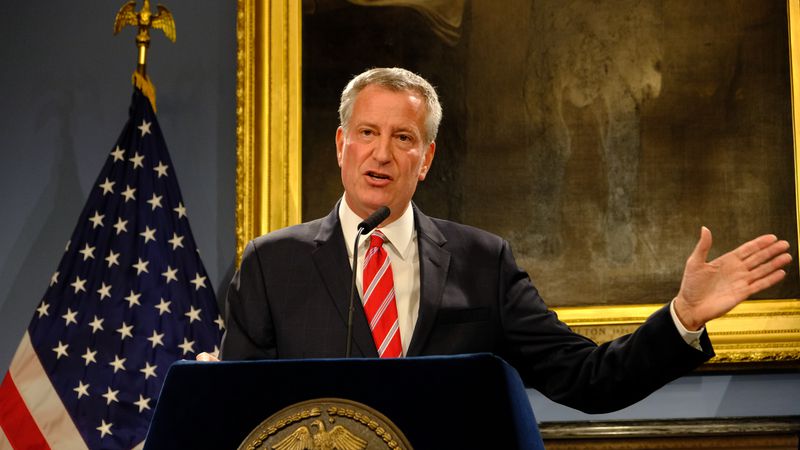 Garner’s daughter, Emerald Snipes-Garner, wore a t-shirt with the word “murderer” written across a picture of Pantaleo.

“I thank you for doing the right thing,” Snipes-Garner said in a message to O’Neill during a news conference with the Rev. Al Sharpton of the National Action Network. "Regardless of how you came to your decision, you finally made a decision that should have been made five years ago.

She urged the department to fire the other officers involved in the arrest.

“I don’t want to see another video of a person being choked out,” Snipes-Garner said. “I should be here with my father. Pantaleo took that away from me.”

“Though this may be good for the city, this is not some moment of pleasure and joy for the family that has lost so much,” Sharpton said.

“I can’t breathe,” Garner cried out 11 times as he was brought down to the sidewalk on Bay St., as seen in a cellphone video exclusively obtained by the Daily News that went viral and drew cries of outrage from around the world.

Garner, suspected of selling loosies — individual, untaxed cigarettes that merchants complain undercut their licensed businesses — told police he had just broken up a fight and did nothing wrong.

“This ends today!” he yelled. 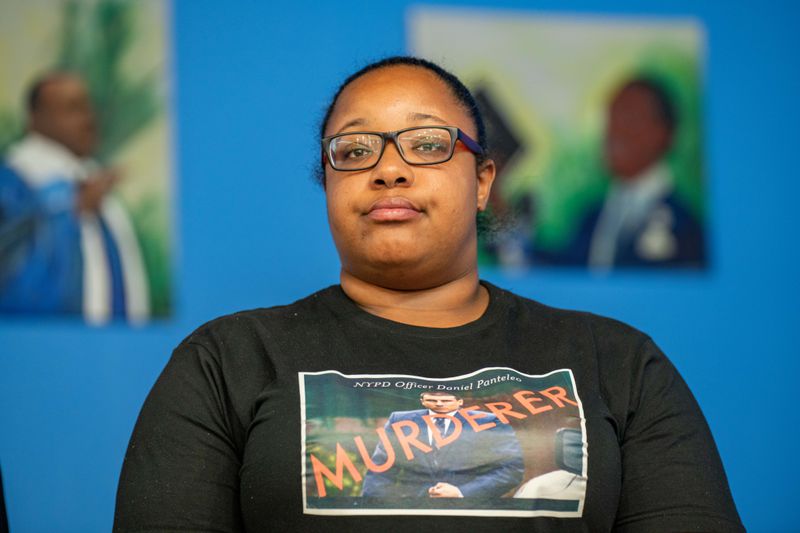 The standoff between the cops and Garner was a garden-variety encounter until police moved in to handcuff him. Pantaleo, far smaller than Garner, who weighed 395 pounds, took him to the ground, his arm around Garner’s neck as they hit the sidewalk.

London argued at Pantaleo’s departmental that the officer used a department-approved “seatbelt” technique to take Garner down, partly so he and Garner wouldn’t crack a storefront plate glass window. Garner died, London argued, because he resisted arrest and was in poor health.

But shortly after the July 17, 2014, incident, then-Police Commissioner Bill Bratton said Pantaleo used a department-banned chokehold. An internal investigation concluded the same, as the did the city Medical Examiner’s office.

Maldonado, who presided over Pantaleo’s departmental trial, said much the same thing in her 46-page decision and all but called Pantaleo a liar.

The 34-year-old officer — who was cleared by a Staten Island grand jury and the U.S. Department of Justice and had been working a desk job without his shield and gun since Garner died — sat stone-faced throughout the trial and did not testify.

But in an interview with internal investigators, the content of which was not revealed in any meaningful way until Maldonado’s decision, Pantaleo was “untruthful,” the judge found. She called his explanation of the fatal encounter was “implausible and self-serving.”

“I examined the totality of the circumstances and relied on the facts‚” O’Neill said Monday. “If I had been in Officer Pantaleo’s situation I may have made similar mistakes."

Reaction was swift, and cut across the community spectrum. 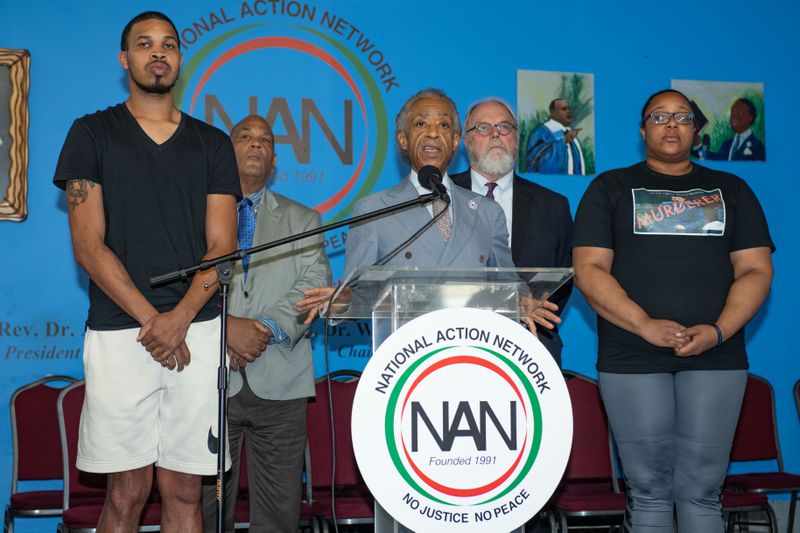 “For over 5 years, the Garner family & communities across the country have waited for justice in the death of Eric Garner,” state Attorney General Letitia James tweeted after the announcement. “With the termination of Officer Pantaleo, today some semblance of justice is finally being served.”

“The reality is that Eric Garner would still be alive today were it not for Mr. Pantaleo’s actions, and while the system has failed Eric Garner’s family repeatedly for the past five years, at least the right thing was done today,” Johnson said in a statement.

“While this decision finally brings closure for the Garner family, NYPD Officer Daniel Pantaleo should have been fired in 2014 and immediately stripped of his pension.," said Tina Luongo, Attorney-In-Charge of the Criminal Defense Practice at The Legal Aid Society.

"Despite Mayor Bill de Blasio’s many attempts to point fingers elsewhere and spread the blame for years of inaction, New Yorkers now know that City Hall had the authority and jurisdiction to act decisively on this matter early on yet still did not,” Luongo said.

Luongo said the ruling does not absolve the city from charging and ultimately firing the other officers involved in Garner’s death.