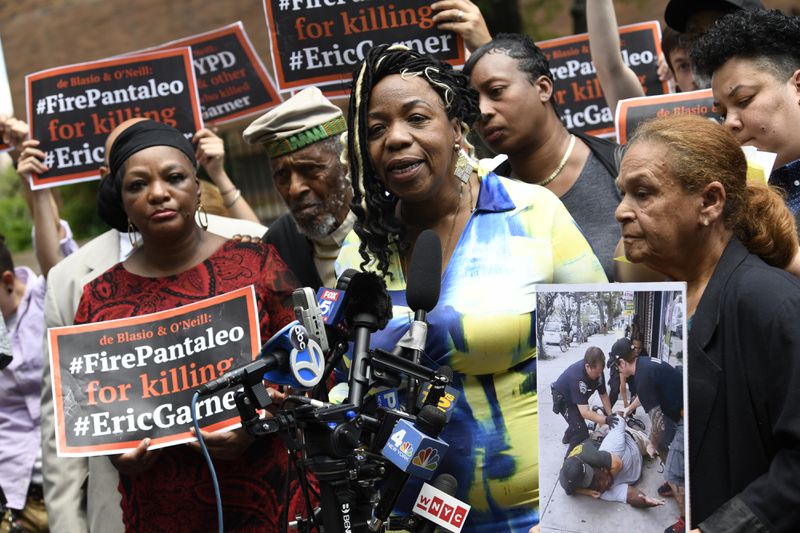 With the career of Officer Daniel Pantaleo on the line, his lawyer came out swinging in his closing argument Thursday, telling the NYPD judge that Eric Garner’s poor health killed him – not the cop’s chokehold.

Reading from an interview Pantaleo gave the Internal Affairs Bureau in December 2014, five months after Garner’s death, attorney Stuart London noted that the cop said he didn’t squeeze the Staten Island man’s neck when he was pulled to the ground to be arrested for selling loose cigarettes.

“There was no pressure to the neck,” London read aloud, quoting Pantaleo’s prior IAB interview. “It was pretty much me just laying on him, preventing him from getting up on all fours.”

Garner’s “throat area was in the crux of my elbow," Pantaleo said, according to the transcript read aloud by London.

The attorney also said Pantaleo who has been on desk duty for the past five years, wants to keep his job.

“He is a hard-working officer,” London said. "He believes in police work. It’s in his blood. He’d love to continue.”

The remarks came after the close of the disciplinary hearing where police-oversight prosecutors said the officer should be fired.

She told NYPD Judge Rosemarie Maldonado that Pantaleo must be fired — and said it should count against him that he wasn’t willing to take the stand and testify in his own defense.

The 43-year-old Garner died during an arrest on Staten Island on July 17, 2014. Pantaleo is seen in a widely watched cell phone video obtained by the Daily News putting Garner in an apparent chokehold that’s banned by the NYPD.

Garner gasped “I can’t breathe” 11 times before dying — and his last words became a rallying cry for the Black Lives Matter movement.

London told Maldonado that the cop had “no intent to strangle” Garner while trying to wrestle the taller man to the ground to handcuff him.

But O’Hare, citing the transcript from the same IAB interview that London was quoting from, noted that Pantaleo essentially admitted to using the banned maneuver when he described how he grabbed Garner.

“It was reckless not to let go,” she said.

London stressed Garner’s poor health as a factor in his demise. Garner was morbidly obese at 395 pounds, with a heart twice the normal size and cardiovascular disease, records show.

Gwen Carr, Garner’s mother, was stunned to hear after the trial that the 34-year-old Pantaleo hoped to remain a cop.

“He wants to kill more people,” she said. “And he wants to keep a six-figure salary.”