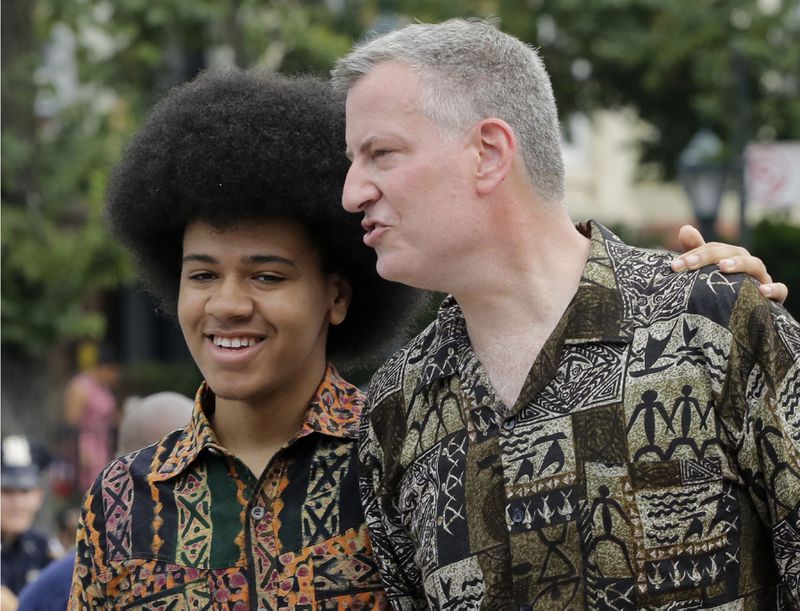 During the first Democratic primary debate, Sen. Kamala Harris and former Vice President Joe Biden tangled about Biden’s record on school desegregation. In a primary that seems destined to become a referendum on who can be the antidote to President Trump, nobody wants to be perceived as an out-of-touch white candidate.

As if taking a cue from his 2013 mayoral campaign, when he polled as low as fourth, Bill de Blasio, struggling for relevancy in his bid for the White House, has returned to what he seems to believe is his ace in the hole: Dante de Blasio. In a USA Today op-ed, the mayor’s mixed-race son wrote about familiar themes this week, like the fear that black Americans shouldn’t feel around police.

The Yale grad also recalled “the speech” that his father gave about interacting with cops. That’s what Mayor de Blasio talked about way back in 2014, which some police officers took as impugning most of their profession as bigoted.

While there is no reason to doubt Dante’s sincerity about race and policing, particularly from his own life experience, is there any doubt that Team de Blasio is looking to use that to salvage the mayor’s dying campaign? If the campaign is looking to energize itself using these issues, the question is how sincere the mayor has actually been on them during his nearly six years in office.

Hizzoner likes to tell the story that during his administration, police stops and arrests have declined while crime has also been driven lower. The points are demonstrably true but not a credit, necessarily, to him. Crime has gone down under the last three mayors. Stop-and-frisk numbers noticeably decreased under the prior administration after becoming politically untenable following protests and a federal lawsuit, all before de Blasio.

Arrests declined under de Blasio’s watch, but much of that happened after mass demonstrations and a national discussion on policing began to include criticism of low-level arrests, a la broken windows policing. Like stop-and-frisk, broken windows arrests for offenses like farebeating became a source of controversy thanks to the work of activists. The criminal justice pendulum swung rapidly left during the height of the Black Lives Matter movement, not because of de Blasio.

On policing, de Blasio’s track record has shown a deference to old-guard ways of law order, as when he made controversial Police Commissioner Bill Bratton his first political appointment. Bratton was the muscle behind broken windows policing in the 90s. The mayor has also displayed an alarming habit of deferring policy matters to the NYPD ever since police union officials organized back-turning protests against him — ironically, in reaction to the mayor’s first reference to giving Dante “the speech.”

De Blasio’s apparent fear of police union tough-guys like PBA President Patrick Lynch can lead you to wonder how a mayor who seems cowed by a local union would fare in the face of national pressures. There are also ethical concerns after a sprawling police corruption scandal that included top police officials seemingly taking bribes from, coincidentally, some of the mayor’s political donors.

On race, de Blasio has come under constant criticism from the left (including myself) not only for defending broken windows policing, which is arguably racist in design and implementation, but also for adding almost 1,300 cops to the department and expanding dangerous tactics that also primarily target communities of color.

Among those are predictive policing, the Orwellian idea that cops can predict crime; it has quietly been developed for an NYPD that claims it is focused on so-called “neighborhood policing.” A secretive gang database, almost exclusively non-white, that catalogs people based in part on who they know and where they live, has grown under this administration.

But let’s not forget the most consequential moment on race and policing during the de Blasio administration, when an unarmed black Staten Island father and grandfather, Eric Garner, was killed in an aggressive police arrest ostensibly for selling loose cigarettes. The officer who put Garner in the chokehold remains employed to this day.

The shameful lack of accountability that the police department continues to employ after almost five years has been rubber-stamped by the mayor, who claims his hands are tied.

That says it all.

Trujillo is a writer and activist.