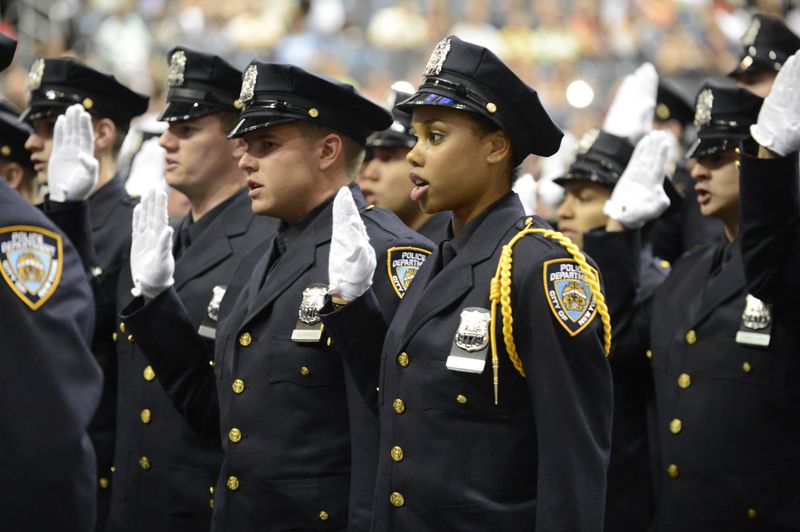 Nearly two dozen Democrats signed off on a letter Monday lamenting the relatively low wages paid to members of the NYPD when compared to neighboring departments in Westchester, Nassau and Suffolk. (Todd Maisel/New York Daily News)

ALBANY — A group of state lawmakers are calling on Mayor de Blasio to boost the pay of New York’s Finest.

Sen. Andrew Gounardes (D-Brooklyn), the chairman of the senate’s civil service and pensions committee, and nearly two dozen fellow Democrats signed off on a letter Monday lamenting the relatively low wages paid to members of the NYPD when compared to neighboring departments in Westchester, Nassau and Suffolk.

“These pay inequities are particularly unjust given the increase in responsibilities that police officers have taken on,” the lawmakers write.

The letter comes as the de Blasio administration and the Police Benevolent Association, representing roughly 24,000 officers, prepare to enter arbitration on a wage contract to replace an agreement that expired a year and a half ago.

As contract negotiations continue, the lawmakers called on the mayor to weigh the wages paid by surrounding cities and counties and to take into account the number of NYPD officers who choose to leave the city for other departments.

The letters notes that NYPD officers earn an average of 40% less than the MTA Police, Port Authority Police, and State Troopers, and almost 50% less than cops in police departments in the city’s suburbs.

“This leads to increasingly severe attrition, as officers flee in droves to take jobs in other municipal or state-level forces that pay more,” the lawmakers write.

The Dems argue that the NYPD’s top patrol officer salary of $85,292 pales in comparison to state troopers’ $103,159, or Suffolk’s $139,233. The also claim that the pay is “not nearly enough to sustain a family or purchase a home in the New York City metropolitan area within which officers are required to live.”

“We applaud Senator Gounardes, Assembly Member Abbate and their colleagues for taking a stand on behalf of cops in their neighborhoods," he said in a statement. “They know how much safe streets mean to their constituents, and they don’t want to see the NYPD hamstrung by below-market police salaries that make it difficult to recruit and retain the Finest.

"Once again, the de Blasio administration is not listening to the voices of regular New Yorkers,” he added.

A de Blasio aide said the mayor’s door is always open to “any union with an outstanding contract.”

“We look forward to reaching a resolution that is fair to both police officers and taxpayers, as we did in 2017,” spokeswoman Laura Feyer added.