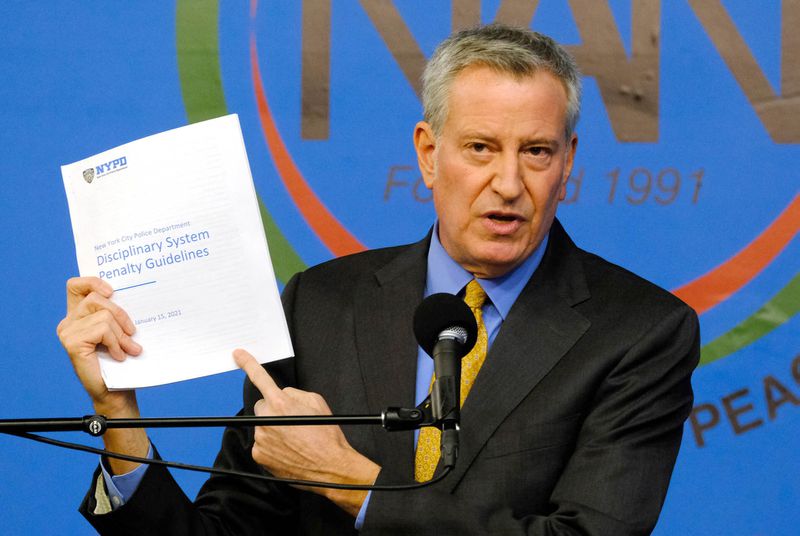 Mayor de Blasio unveiled on Friday the first part of a police reform plan that aims to repair frayed relationships with communities of color and address years of racism in policing.

The plan, which de Blasio expects to release in three drafts in the coming weeks, comes in response to an executive order issued by Gov. Cuomo in June that mandates local governments approve reforms and submit them by April 1 — or risk losing state funding and having their police departments fall under a monitor.

“The dire problem of racism in policing has existed in the United States from its origins,” de Blasio’s plan states. “Addressing the legacy and harm of racialized policing in New York is a critical step in starting the healing process.”

The first-draft report expands on several policies de Blasio touched on during his January state of the city address, such as strengthening the Civilian Complaint Review Board by giving it the authority to probe allegations of biased policing, overhauling the NYPD’s patrol guide and forcing the department to hand over body-camera footage within a tighter time frame.

Under the plan, the NYPD would work with violence interrupter groups to launch a joint task force to end gun violence and would be required to produce a website providing the disciplinary records of officers, including the charges against them, penalties incurred and trial decisions.

Other new initiatives include consolidating victim services into one agency to better support survivors of crime, restorative justice training for police brass and expanding mental health services for rank-and-file cops.

The city also plans to call on the state to rewrite its own laws to give entities like the CCRB access to sealed records to assist it in probing police matters.

But the plan is not final.

De Blasio intends to incorporate separate, yet-to-be-determined initiatives from the City Council, as well as community input in the final version, which will be voted on by the Council and submitted to the state by April 1.

The city also plans to call on the state to rewrite its own laws to give entities like the CCRB access to sealed records to assist it in probing police matters.

In January, the Council unveiled its own set of police reform proposals. They include bills that would take final authority over NYPD disciplinary matters away from the police commissioner, curtail immunity for cops in civil court proceedings and require future commissioners to be vetted and confirmed by the Council, instead of simply being appointed by the mayor.

But it remains unclear if any of those proposals will find their way into de Blasio’s final draft of reforms.

The plan also drew harsh criticism Friday from police reform advocates who described it as “a public relations tool for the NYPD.”

“This isn’t a plan that rethinks safety or policing — it’s a PR plan for the police,” said Loyda Colon, a spokesperson for Communities United for Police Reform. “There isn’t one recommendation in the report that will directly reduce police violence, lead to the firing of abusive officers, or reduce the NYPD’s outsized power or bloated budget.” 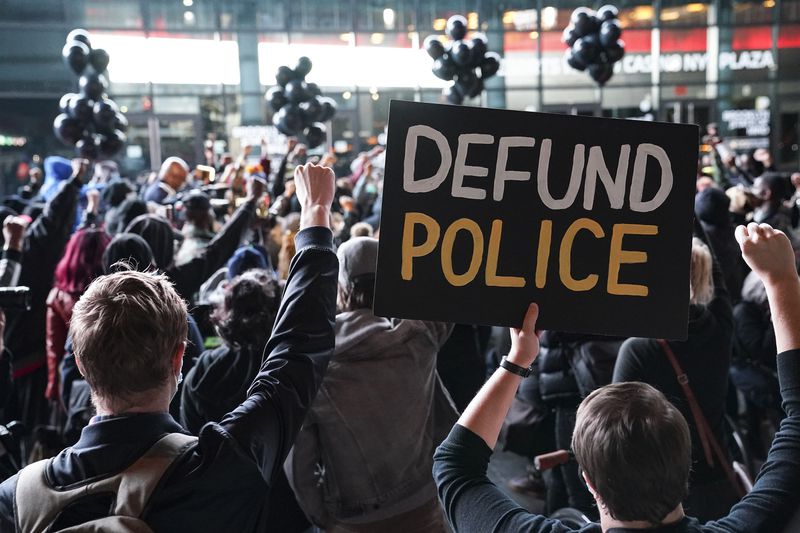 FILE - In this Wednesday, Oct. 14, 2020, file photo, a protester holds a sign that reads "Defund Police" during a rally for the late George Floyd outside Barclays Center, in New York. (John Minchillo/AP)

PBA President Patrick Lynch isn’t pleased with the plan either.

“New York City police officers are already laboring under a two-decade-deep pile of supposed ‘reforms’ that do nothing to help us keep New Yorkers safe,” he said. “Most of the proposals in Mayor de Blasio’s latest report can be thrown on that pile.”

How Gov. Cuomo will respond to whatever de Blasio and the Council submit is an unsettled matter as well.

Before Cuomo became mired in two possibly career-ending scandals — his handling of nursing homes during the pandemic and allegations that he sexually harassed three women — he made it a point to publicly needle de Blasio over the possibility that a monitor could exact control over the NYPD.

On Wednesday, while making a public apology for acting “in a way that made people feel uncomfortable,” Cuomo also re-upped his critique of policing in the city, saying that crime in the Big Apple is “way up.”

De Blasio’s police reform package offers an apology of its own, although it doesn’t come directly from the mayor himself. It is instead taken from the mouth of NYPD Commissioner Dermot Shea, from comments he made to the Greater Harlem Chamber of Commerce last month.

Shea was discussing the harm that “many years of racist policies and practices have caused.”

“We have to acknowledge this truth — and I do. And we must acknowledge the NYPD’s historical role in the mistreatment of communities of color,” he said. “I am sorry.”