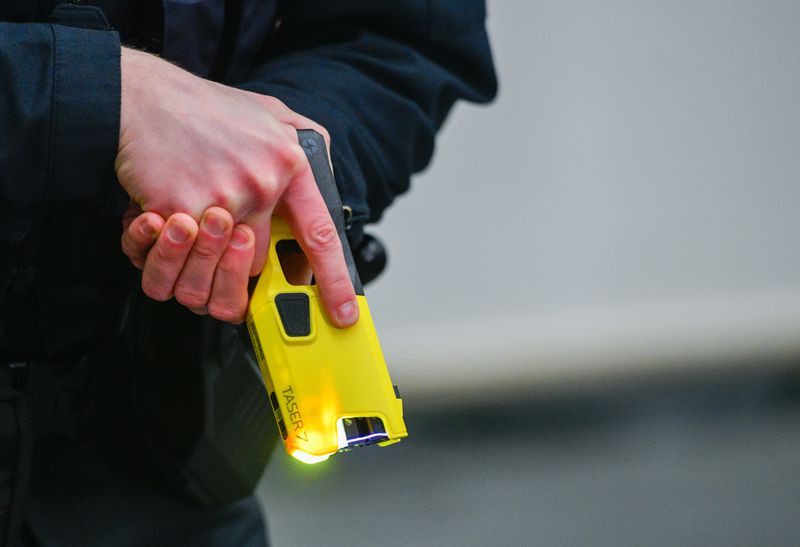 A police officer demonstrates the handling of an Taser. (Sascha Schuermann/Getty Images)

The NYPD plans to put more Tasers in the holsters of cops on patrol by taking them away from higher-ranking sergeants and lieutenants – but the move won’t fix what some in the department see as a shortage of the non-lethal weapons.

The department wants to redistribute 2,876 stun guns from the supervisors to the general Taser pool used by all patrol officers, the Daily News has learned.

“When supervisors are off-duty or on vacation, the Tasers were sitting idle, so the idea is to get them into greater circulation,” a police official said.

The 7,425 Tasers now deployed by the department are enough to put one in the hands of every cop and supervisor on all three shifts in all 77 police precincts, and the NYPD is in the midst of buying another 605 of them, officials said.

“We utilize these conductive electrical weapons and give them out to as many officers as we can because they remain a less-lethal force option,” said NYPD spokesman Alfred Baker said.

But budget constraints make it unlikely the NYPD will buy the Tasers it would need for all of the roughly 21,000 patrol officers to have their own.

“It’s a question of scale, cost and trying to do the best you can with the tools you have,” a police official said.

Some in the NYPD argue that broader distribution of Tasers might make them safer for officers to use.

Every time cops are issued Tasers at the start of their shifts, they’re required to perform a “spark test” to make sure they are operating properly.

In a spark test, an officer fires the device into a metal tube usually located at a precinct’s front desk or muster room.

The state Public Employee Safety and Health Bureau is investigating an NYPD officer’s complaint that the spark tests are unsafe.

“This procedure is dangerous,” Sgt. Harold Gates wrote in a complaint filed with the agency in November and obtained by The News. “The front desk is the most heavily trafficked area of the command.”

Gates also alleges that before each Taser is handed out, the desk officer removes the cartridge that contains the electrically-charged darts fired at people threatening violence.

“This cartridge is plastic and weakens each time it is removed from the Taser,” he writes. “This increases the risk. It defies common sense.”

The NYPD acknowledged in a department-wide memo in March that sloppy storage of the plastic cartridges has led to “a high amount of damaged cartridges.”

“In order to avoid damaged CEW [conducted electrical weapon] cartridges and accidental discharges, cartridges are not to be stored loosely,” the memo said.

While the department insists injuries are rare, they happen. In 2014, Officer Pasquale DeThomas was shot in the face by a colleague during a spark test, court records show.

The incident left the Bronx cop with a lasting injury to his face, his lawyer Richard Gilbert said.

But police officials note that’s still down from the 415 accidental firings in 2018.

Of the 328 accidental firings in 2020, some 322 were from spark tests -- a minuscule number considering the roughly 6.3 million spark tests conducted that year, officials note.

Patrick Lynch, president of the Police Benevolent Association, says equipping each officer with a Taser is worth considering.

“Cops need less-lethal force options to keep violent encounters from spiraling out of control, but politicians keep stripping those tools away,” he said.

“The City Council doesn’t believe we should use batons or pepper spray or even touch a resisting suspect’s torso, but Tasers are the one tool they have embraced,” Lynch added. “If the NYPD doesn’t have a sufficient supply of Tasers or if they aren’t working properly, it creates a much more dangerous situation for both cops and the public.”