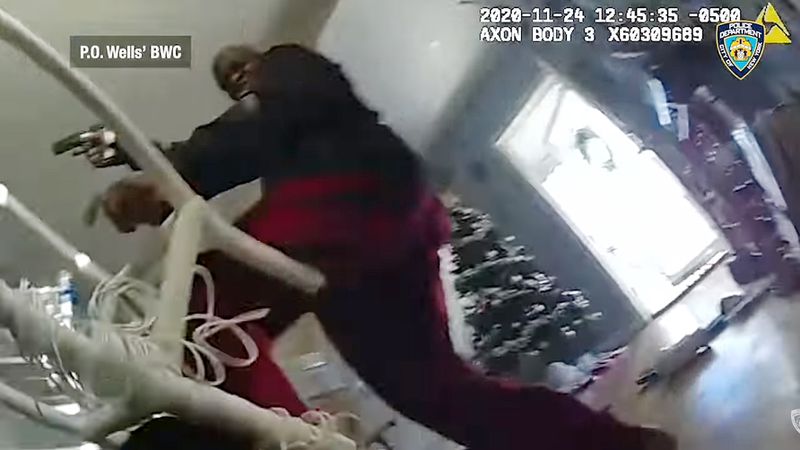 The Nov. 24, 2020, shooting of Rondell Goppy, 41, by officers Christopher Wells and Joseph Murphy is still under investigation, the NYPD said Friday, but Police Benevolent Association head Pat Lynch said it’s clear that the cops, at the home to help Goppy’s wife, had no other choice but to shoot the gunman. (NYPD)

Domestic violence suspect Rondell Goppy’s final act was to open fire at a pair of cops in Queens — and the last 10 seconds of his life were captured by cameras worn by the men who shot him dead.

Goppy, 41, wounded officers Christopher Wells and Joseph Murphy in the gunfight Nov. 24 at his home in Springfield Gardens.

Wells and Murphy’s actions are still under investigation, the NYPD said Friday — but the head of their union said the video leads to just one conclusion: the wounded cops had no choice but to shoot back. 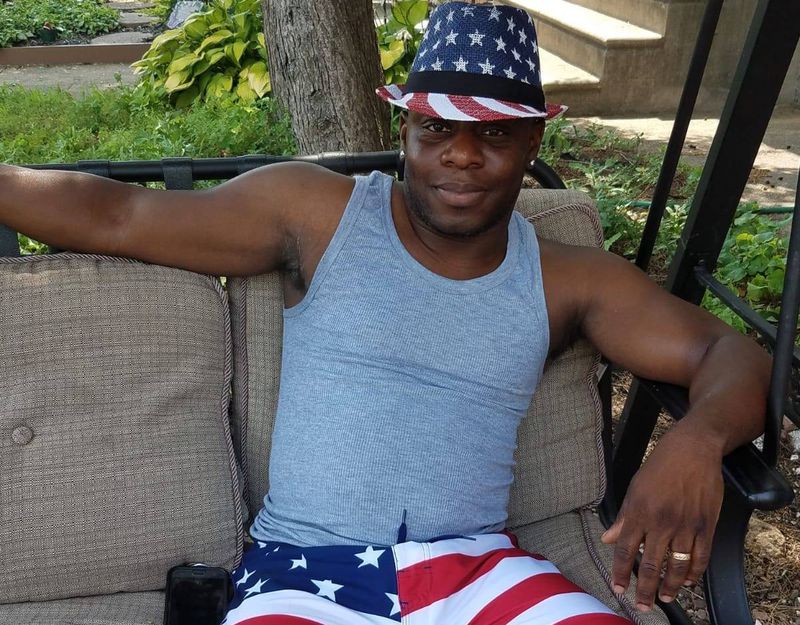 “This video is chilling and difficult to watch,” said Lynch. “But it makes one thing clear — police officers Wells and Murphy saved their lives.

“They saved the lives of that domestic violence victim and her children, and they saved each other’s lives — all because they had the training, skill and courage of New York City police officers,” Lynch said. 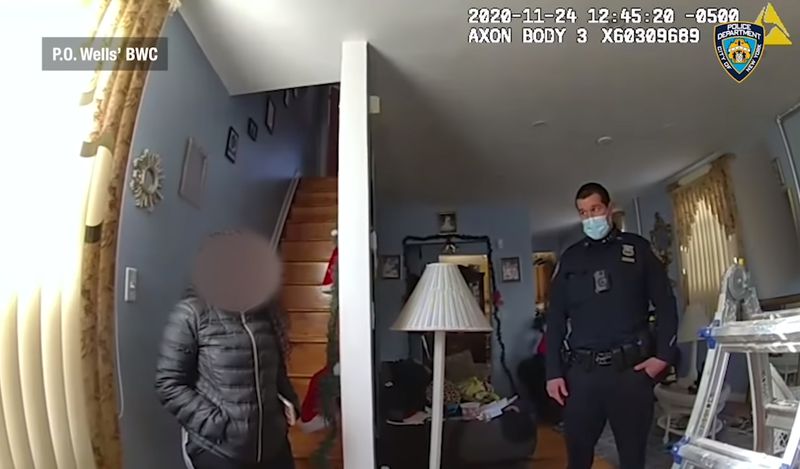 Wells and Murphy took Sharon Goppy's domestic violence complaint and then escorted her to her home on 179th St. in Springfield Gardens. (NYPD)

The shooting was set in motion earlier in the morning when Sharon Goppy, also 41, walked into the 105th Precinct in Queens Village to report that her husband, a City College security officer, had choked her the night before during an argument over his suspected infidelity, police said.

Wells and Murphy took the report, then escorted Goppy to her home on 179th St. in Springfield Gardens.

The suspect wasn’t home at the time, and the couple’s children were in school. 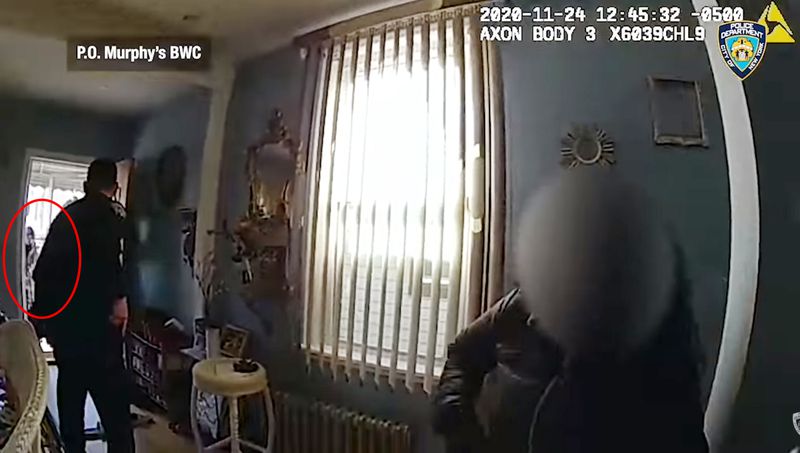 Rondell Goppy was armed with two handguns — including a .40 caliber Glock in his right hand, a camera outside the home showed. (NYPD)

The officers’ body-worn cameras show them talking to Sharon Goppy outside the home, discussing her options, including whether she could disable the security cameras outside their home because they are controlled by her husband.

The three of them then stepped inside the house to discuss what she would do.

Goppy said she wanted to take her kids to her sister’s house. She and the officers discussed her changing the locks and whether she could get into the safe where the suspect kept his licensed guns.

Then Rondell Goppy showed up.

Rondell Goppy was armed with two handguns — including a .40 caliber Glock in his right hand, a camera outside the home showed.

What happened next took 10 seconds. 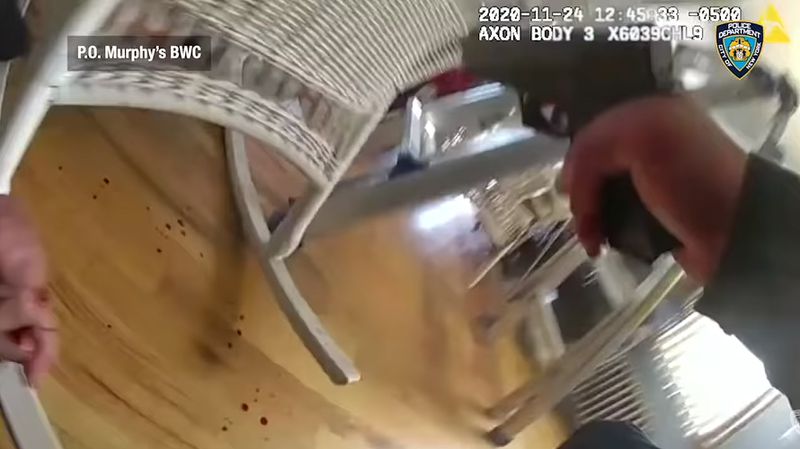 Both cops returned fire. Wells fired nine shots, and Murphy fired 15, cops said. Their bullets hit Rondell Goppy in the chest, side, back and both feet. (NYPD)

Without saying a word, the gunman burst through the front door, opened fire with 11 shots, and charged at Wells.

During the confrontation, a wicker stool was knocked over.

A bullet hit Wells in the right thigh. Murphy, further back in the home, was shot in both hands.

Despite their wounds, both cops returned fire. Wells fired nine shots and Murphy fired 15, and their bullets hit Goppy in the chest, side, back and both feet, police said. 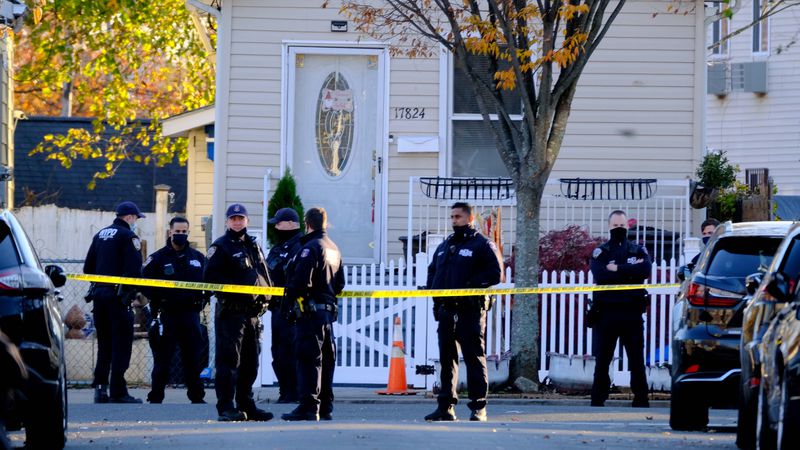 Big drops of blood fell to the home’s hardwood floor, and moans of pain can be heard on the video.

Wells put a tourniquet on his leg. A finger on Murphy’s left hand was shattered.

Sharon Goppy, who had fled to the basement, was not hit. 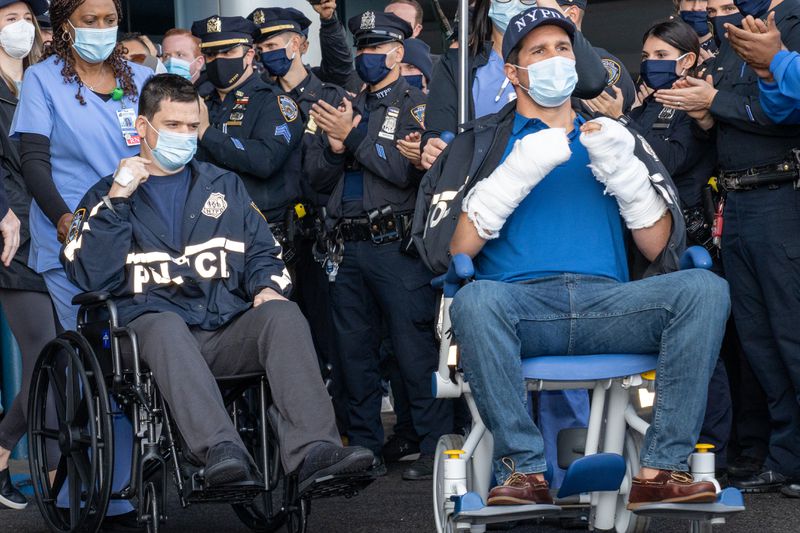 Goppy surrendered his guns following an argument with his wife in July in which he talked about killing himself, said police.

But two psychiatrists later cleared Goppy to return to his security guard job, and he got his guns back.

Sharon Goppy also felt his weapons should be returned to him, and wrote a letter to the NYPD saying at the time that she did not feel her life was in danger.