NEW YORK (Reuters) - New York Police Department Commissioner James O'Neill will step down to take a new job in the private sector, he said on Monday, about three months after his decision to fire an officer accused of using a banned chokehold that caused the death of a black man.

"This is a job that consumes you," O'Neill said at a news conference attended by Shea and New York City Mayor Bill de Blasio. O'Neill said he would leave the post in a month.

O'Neill, who was appointed in 2016, said criticism leveled at him for his decision in August to throw Daniel Pantaleo off the police force, five years after the death of Eric Garner in New York's Staten Island borough, was not a reason for his leaving.

Even so, O'Neill said the controversy troubled him deeply.

"It wasn't a motivating factor in my decision," O'Neill said. "I'm not going to stand up here and say it didn't weigh on me heavily."

Both the Staten Island prosecutor and the U.S. Justice Department declined to charge Pantaleo in the case. An NYPD administrative judge found him guilty of committing reckless assault and violating department rules by using a banned chokehold.

Garner's death was one of a series of killings that sparked nationwide #BlackLivesMatter protests over allegations of police mistreatment of minorities.

Pantaleo filed a lawsuit against the NYPD last month, alleging that he was wrongfully terminated. 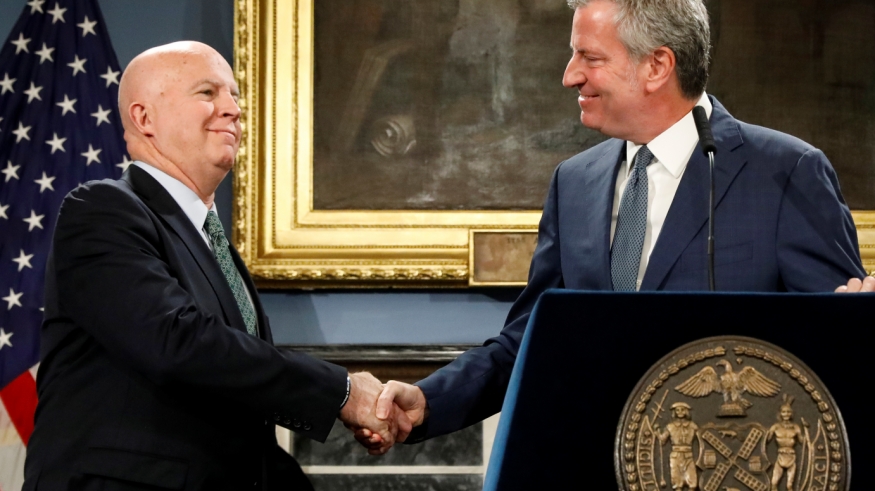 "We look forward to working with Commissioner Shea to combat the current anti-police atmosphere and make positive changes that will improve the lives of our police officers and every New Yorker we protect," the PBA said in a statement.

O'Neill's next job is in the private sector, de Blasio said. O'Neill declined to provide further details, saying only that it was "something I couldn't pass up."

De Blasio praised O'Neill for his efforts to fight crime and improve relations between New Yorkers and police.

"Jimmy can be proud of the fact that crime in New York City today is at the lowest level its been since the 1950s," de Blasio said.

O'Neill, who has worked in New York City law enforcement since 1983, started his job as commissioner on the day a bomb exploded in the Chelsea neighborhood of Manhattan, injuring 30 people in September 2016.