By Nicole Fuller and Matthew Chayes

NYPD Officer Wilbert Mora appears in an undated photo release by the NYPD.  NYPD via AP

A second NYPD officer died Tuesday from injuries he suffered last week after a man opened fire on the officers while they responded to a domestic dispute inside a Harlem apartment.

"It’s with great sadness I announce the passing of Officer Wilbert Mora," New York City Police Commissioner Keechant Sewell said on Twitter. "Wilbert is 3 times a hero. For choosing a life of service. For sacrificing his life to protect others. For giving life even in death through organ donation. Our heads are bowed & our hearts are heavy."

Mora, 27, had been hospitalized at NYU Langone Medical Center in Manhattan. Officer Jason Rivera, 22, died at Harlem Hospital the night of the Friday evening shooting. Both officers lived in Manhattan.

New York City Mayor Eric Adams on Tuesday ordered all flags on city buildings to continue to be flown at half-staff in honor of Mora. 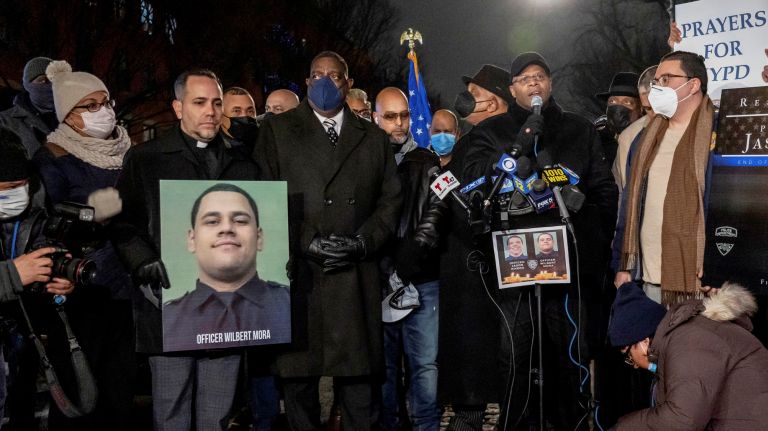 "Wilbert Mora was a hero," Adams said on Twitter. "He served his city, protected his community and gave his life for our safety. ...To his family, loved ones and his brothers and sisters in the NYPD: Your city is standing with you today and always."

Mora's family could not be reached for comment Tuesday.

"When Officer Wilbert Mora's family was notified of his passing, his family knew their brave and dedicated son would want to continue to save lives, even in death," Achan said.

"Officer Mora’s final gift was the gift of life to others in need. He was transferred from Harlem Hospital to NYU Langone Health, where we have honored the family’s wishes for him to be an organ donor hero, so that he may ‘Live On’ while saving the lives of others. We extend our deepest condolences to the families, and friends of both officers, and our thoughts and prayers remain with them at this difficult time."

Funeral plans for Mora have not been announced.

"Our brother Police Officer Wilbert Mora has left us, but he will live on in the heart of every New York City police officer from this day forward," said NYPD Police Benevolent Association president Patrick J. Lynch.

Nassau County PBA president Thomas Shevlin said in a statement: "All Nassau County cops grieve with their brothers and sisters in the NYPD today following the tragic loss of Officer Mora who was murdered in the line of duty."

The Suffolk County Police Department in a tweet said: "His valor and sacrifice will never be forgotten. We stand beside our brothers and sisters in law enforcement during this devastating time."

Attorney General Letitia James said in a statement: "I join all of New York today in mourning the heartbreaking death of Officer Wilbert Mora. He was a hero until the end. Officer Mora and his partner, Officer Jason Rivera, showed courage in the face of imminent danger to protect New Yorkers. Their bravery exemplified their commitment to protecting the city they loved."

Suspected shooter Lashawn McNeil, 47, who police said opened fire on Mora and Rivera, was shot and critically wounded by a third officer who had also responded to a 911 call placed by McNeil's mother. McNeil died of his injuries Monday.

Adams, speaking on MSNBC before Mora's death was announced, said he will seek permission from the families of the fallen officers to publicize body-worn camera footage for "the entire country to see what happened."

"This was horrific, to see how they were assassinated in that apartment," Adams said.

Mora was born in the Dominican Republic and came to the United States at a young age, his family seeking a better life, said Mora's friend Rashad Mujumder, in an interview over the weekend before Mora's death.

"He took a lot of pride in being a police officer, especially being a young Hispanic man," said Mujumder, 26, of the Bronx. "He wanted to be someone people could look up to."

Mora attended the High School for Graphic Communication Arts in Manhattan and the John Jay College of Criminal Justice.