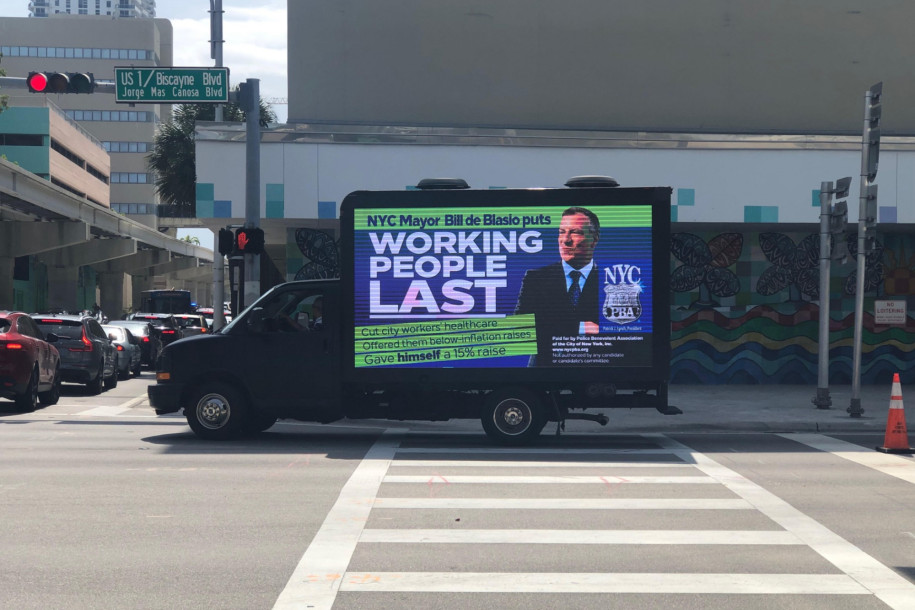 Hizzoner might be able to leave New York — but not his Big Apple blues.

“Our part-time mayor thinks he can do his job from the campaign trail, so we’re bringing the to-do list to him,” said Police Benevolent Association president Patrick Lynch.

Joined in solidarity by representatives from local police unions, about 20 PBA members will gather outside Detroit’s Fox Theatre on Wednesday, when de Blasio is set to take part in the second night of the debates.

The PBA will also have a billboard truck in the area, and is taking out a full-page in Wednesday’s Detroit Free Press that blares, “NYC Mayor Bill de Blasio puts working people last.”

A mock-up of the ad shared with The Post also pans de Blasio because he “cut city workers’ healthcare, offered them below-inflation raises and gave himself a 15-percent raise.”

Lynch — who accused de Blasio of using “anti-police rhetoric” during the first round of debates last month — said that as Hizzoner runs his quixotic campaign for the White House, he needs a reminder of his shortcomings in City Hall.

“New York City police officers are underpaid by upwards of 30-percent in comparison to other agencies who work the same streets, but Mayor de Blasio has offered nothing but below-inflation raises and cuts to health benefits,” said Lynch, whose union has taken its battle with de Blasio on the road before.

“If he wants to run around the country telling voters that he puts ‘Working People First,’ he needs to practice what he preaches,” added Lynch. “He should start by paying our cops a fair market wage.”

City Hall did not immediately respond to a request for comment.