By Julia Marsh and Bruce Golding

Mayor Bill de Blasio can’t escape the long arm of the NYPD’s biggest union as he continues his quixotic quest for the White House.

Nearly two dozen members of the city’s Police Benevolent Association plan to protest against Hizzoner before he takes the stage at Wednesday night’s first Democratic presidential primary debate in Miami.

The PBA expects its ranks to be swelled to around 100 by police union members from Miami and West Palm Beach, as well as retired NYPD cops living in the Sunshine State.

The powerful union — which is headed to arbitration with the city over a new contract — took out a full-page, $15,000 ad in Wednesday’s Miami Herald that features a photo of the mayor smirking and the words “NYC Mayor Bill de Blasio puts WORKING PEOPLE LAST.”

“Voters — and de Blasio’s opponents on the debate stage — deserve to know the truth.”

The de Blasio campaign declined to comment, but released a statement in which several New York City unions — including those representing retail, transit and hotel workers — endorsed him as “the most pro-labor Mayor New York City has had in decades.” 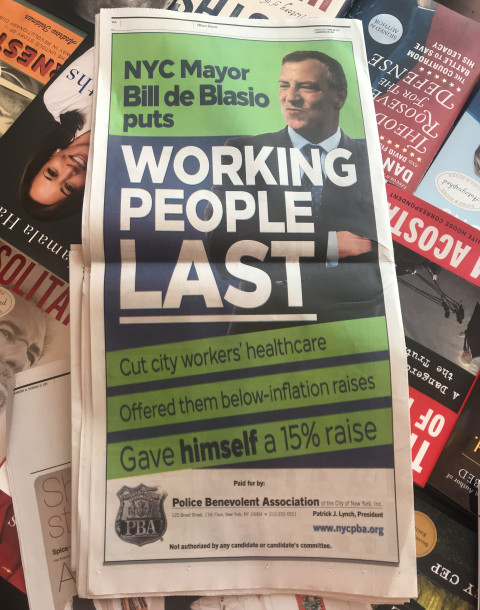