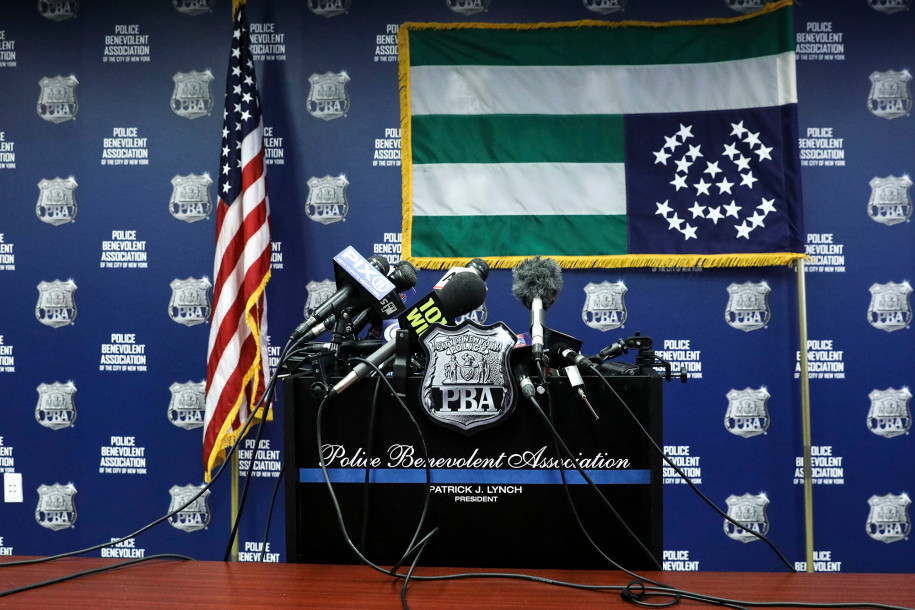 The NYPD flag is displayed upside down, symbolic for 'in distress,' before a press conference after the announcement of the termination of officer Daniel Pantaleo at PBA headquarters on August 19, 2019 in New York City. Getty Images

NYPD union officials visited precincts across the city on Tuesday to urge that cops use “extreme caution” when busting suspects to avoid the fate of former colleague Daniel Pantaleo — and many took the advice to heart, sources said.

The Police Benevolent Association tweeted photos of dozens of officers holding copies of a flyer titled “Guidance for All PBA Members on Arrests & Use of Force.”

“Brooklyn South Trustee Anthony Cacioppo met with officers in the @NYPD67Pct to spread the word to take extreme caution when making an arrest to make sure no unnecessary discipline or loss of job occurs from the arrest #JobisDead #NoConfidence,” one post says.

The one-page handout instructs cops to summon a patrol supervisor and other officers to “every job involving a possible arrest situation” and wait for the backup to arrive unless facing a matter of life or death.

It says cops should “confer with the patrol supervisor” before making any arrests, and document any and all instructions they receive in their memo books.

The memo was drafted following Police Commissioner James O’Neill’s decision Monday to fire Pantaleo for official misconduct in the 2014 death of Eric Garner, who O’Neill said was put in a prohibited chokehold while resisting arrest in Staten Island.

“This is all jobs, anywhere from a car accident to a domestic dispute to an arrest,” one source said.

“The reason for this is, since the police commissioner and the mayor are quoting the Patrol Guide, police officers are now going to go by the Patrol Guide as well, to protect themselves.”

An NYPD spokesperson said: “The dedicated men and women of the NYPD would never take inaction that would endanger themselves or the people of this city.”