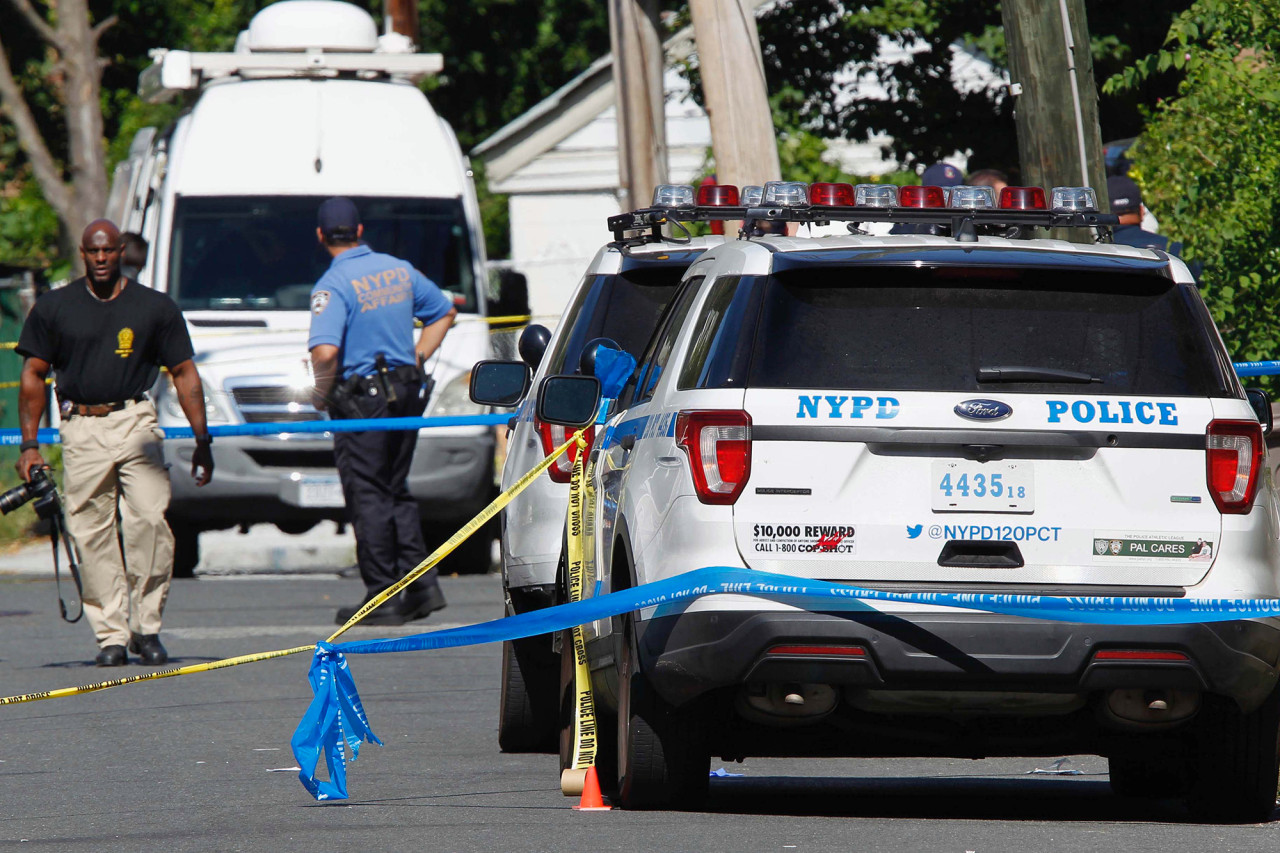 Police at the scene where a cop was shot on Staten Island on Tuesday.  Photo: G.N.Miller

Onlookers pelted police with profanities and death wishes shortly after officers killed a career criminal in a wild shootout that left a cop with a bullet in her hand.

“Suck my d–k!” bellowed one man at a police cordon for about two consecutive minutes along the Clifton street, where the officer was struck on the left hand around 8:45 a.m. “Everybody behind that line can suck my d–k!”

Much of the invective came from a group of 14 people restricted to the driveway of one Prince Street home while cops painstakingly processed the scene where the Finest was wounded and gunman Gregory Edwards was shot dead.

Edwards — a 39-year-old convicted felon with 16 arrests, including three for weapons possession — was approached by cops as a suspect in a domestic assault, and responded by trying to flee, according to authorities.

Cops zapped Edwards with a Taser, but it didn’t take, and he began his fatal exchange of fire with the officers, sending police racing to the scene — though they were hardly welcome.

“Get the f–k out of here!” screamed one person, amid what was still a very active investigation of the shootout.

“All of y’all can die!” shouted another at cops from the 120th Precinct — the command where Eric Garner died in a fatal 2014 struggle with police, sparking a political powder keg. “I hope that happens.”

Department insiders said that the vulgar display speaks to a growing hatred of cops on city streets.

“You hear this more and more,” said one police source. “The public just has no respect for cops. All they want to do is fight cops. It never used to be that way.”

A second source charged that the public has taken its cue from City Hall, which has frequently been at odds with the NYPD under Mayor Bill de Blasio.

“It all started with de Blasio. He’s the one to blame for the way the public treats cops,” said the insider, pointing to the 2014 ambush slayings of Officers Wenjian Liu and Rafael Ramos in Brooklyn.

“I’m glad I’m near the end of my service,” said the source, who is close to retiring from the department. “And I’m also glad my son decided not to become a cop.”

A third source said that the scene should hardly shock the senses.

“Are you surprised?” asked the source. “Somebody’s shooting at a police officer and nobody cares. … They’re more concerned about the perp than the cop who’s there to protect them.

“You call the police to do a job, a cop gets shot, but they’re upset that a guy who was shooting a cop is dead.”