Teen on parole for paralyzing NYPD cop in 2017 busted in stolen car: sources 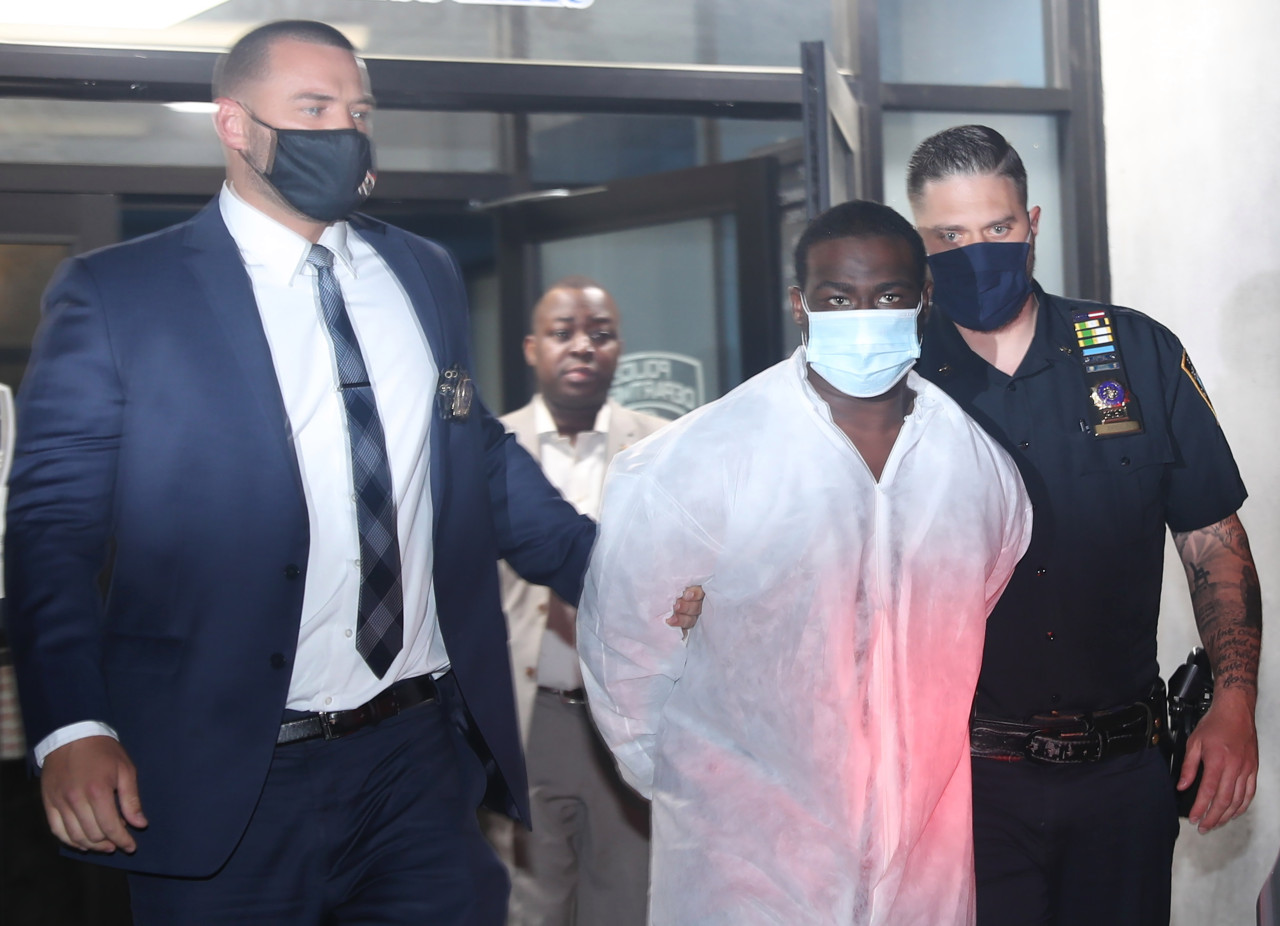 A reputed gang member who used a stolen car to permanently disable an NYPD cop was busted for reckless driving in another ride he’d allegedly swiped early Sunday — with just weeks left to go on his parole, according to police and law enforcement sources.

The teenage ex-con — a reputed member of the Eight Trey Crips and G Stone Crips gangs — then tried to run away, but was caught and taken into custody around 1:20 a.m., sources said. 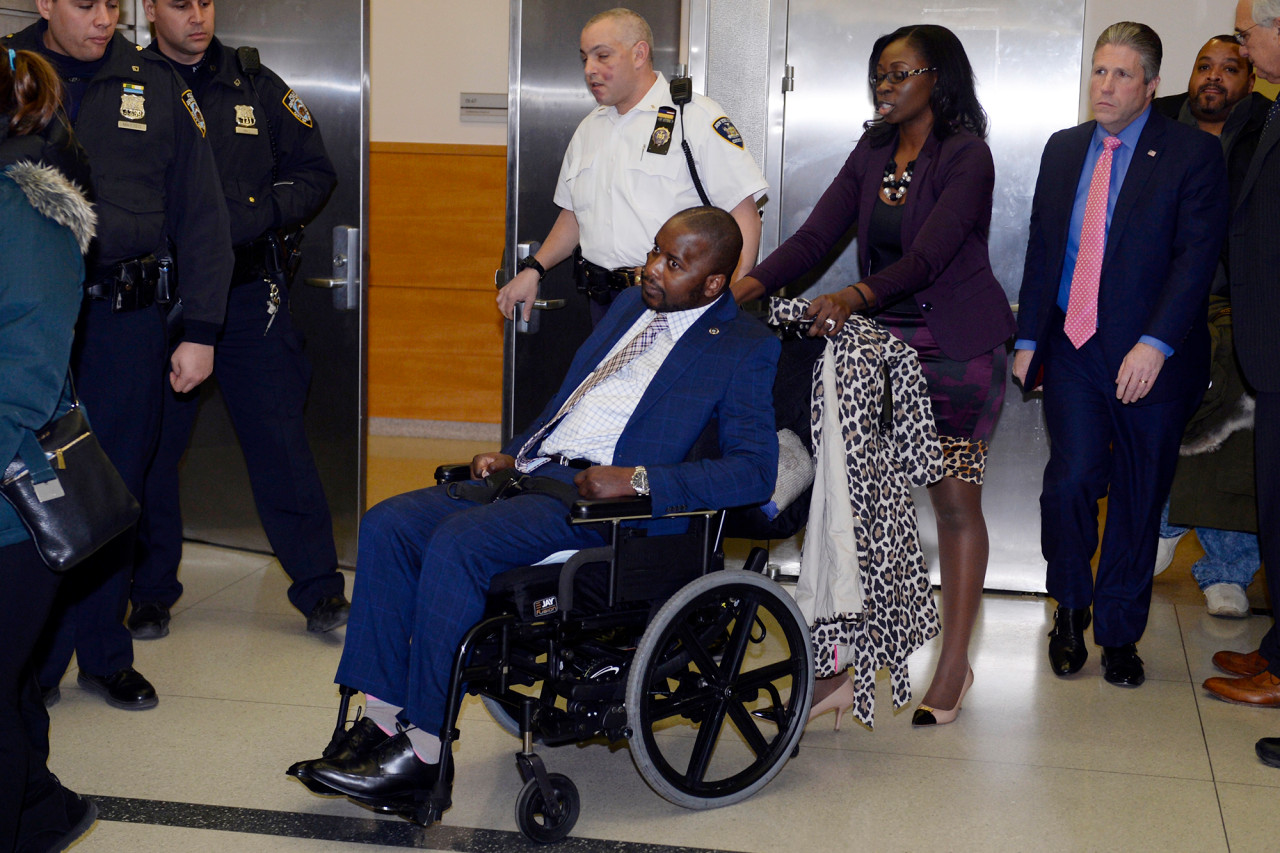 Ex-detective Dalsh Veve pushed by his wife at the Brooklyn Supreme Court for the sentencing of Justin Murrell. R. Umar Abbasi

The crashed 2021 Honda, which had a temporary Alabama license plate, was reported stolen in Valley Stream, Long Island.

Murrell was charged with grand larceny of a motor vehicle, reckless endangerment, criminal possession of stolen property and failure to obey a traffic device, police said.

The cops spotted Murrell while responding to an automated ShotSpotter report of gunfire in the area and the NYPD is investigating whether he’s connected to the shooting, sources said.

The red Honda Accord with chromed, five-spoke rims that he allegedly wrecked was later stashed across from the 75th Precinct in East New York with extensive damage to its driver’s side, including a dangling, broken side-view mirror and a front-door handle that’s half torn off.

The passenger side of the front bumper was also broken and hanging off the frame, and the rear license holder — which says “HONDA Racing” with an image of a checkered flag — was empty.

Murrell, who was 15 at the time of that incident, beat the attempted murder rap, but Veve suffered brain damage when he was thrown off while hanging onto the stolen black Honda Civic.

Although he faced a maximum 10-year sentence, Murrell — who was prosecuted as an adult — was sentenced as a juvenile to just 1-1/3 to four years in detention.

He was released in March 2020 and his parole was set to expire on June 10, law-enforcement sources said. 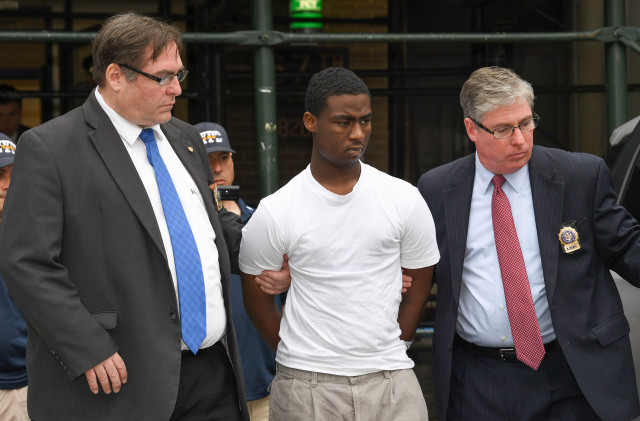 Justin Murrell is walked from the 67th pct. in Brooklyn on June 16, 2017. Paul Martinka

Sources said Murrell has 12 prior arrests, including the Veve case.

“This perp dragged a hero New York City police officer behind a stolen car, paralyzing him. He had an extensive criminal record before that,” said Lynch.

“And yet we had a judge and elected officials who thought he should be given yet another chance and put right back on the street. That extra chance could have gotten a police officer or innocent New Yorker killed.”

Lynch added: “What will it take for our broken justice system to keep him behind bars where he belongs?”

At Murrell’s sentencing in 2019, the union chief blasted his punishment as “wrong and there’s no nice way to say it.”

Veve was promoted to the rank of detective while still in intensive care following the incident, during which the hero cop shot Murrell in the face.

The president of the NYPD Detectives’ Endowment Association, Paul DiGiacomo, said Sunday that if Murrell had “stayed behind bars where he belongs … he would not be able to hold our Brooklyn neighborhoods hostage with threats of continued violence as he did last night in yet another stolen vehicle.”

“While the investigation into Murrell’s arrest is underway, it is imperative for public safety that he faces serious consequences as it is quite clear he has no intentions of changing his criminal ways,” DiGiacomo added.