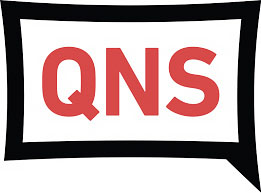 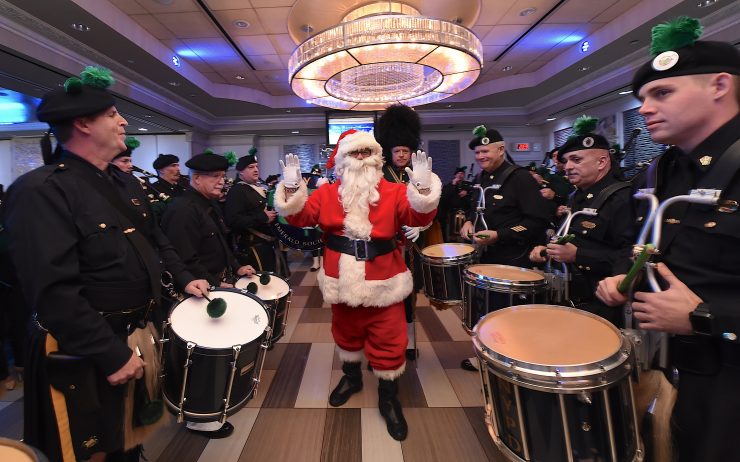 The Police Benevolent Association celebrated the holidays with the widows and children of cops killed in the line of duty at Russo’s on the Bay in Queens, the Pipes and Drums welcome Santa. (Photo by Todd Maisel)

For families of New York police officers killed in the line of duty, the holidays can be a difficult time of the year. But the Patrolman’s Benevolent Association (PBA) does their best to lift spirits among their “blue family” with music, great food and fraternalism.

Hundreds of families and fellow cops jammed Russo’s on the Bay in Howard Beach, Queens, on Saturday night for this important event to show support for families who have lost their loved ones as cops.

Among those in attendance was new Police Commissioner Dermot Shea with his wife Serena, Chief of Department Terrence Monahan, and a host of entertainers – including the NYPD Pipes and Drums who welcomed Santa Claus with the song “Santa Claus is Coming to Town.”

Some of the widows and children have been attending the PBA holiday event for more than 40 years, never forgetting their loved ones — and always finding comfort from the cops who always promise to “never forget.”

Barbara Connolly has been coming to the Widows and Children holiday party for 46 years, ever since her husband — Police Officer George Connolly, a member of the bomb squad — was killed in a vehicle accident while responding to an explosion in a building on Fifth Avenue in lower Manhattan.

“It’s sad, but you have to move on. You have to make a new life for yourself. We are so strongly supported by the PBA and every police officer on the street – that’s comforting,” Connolly said. 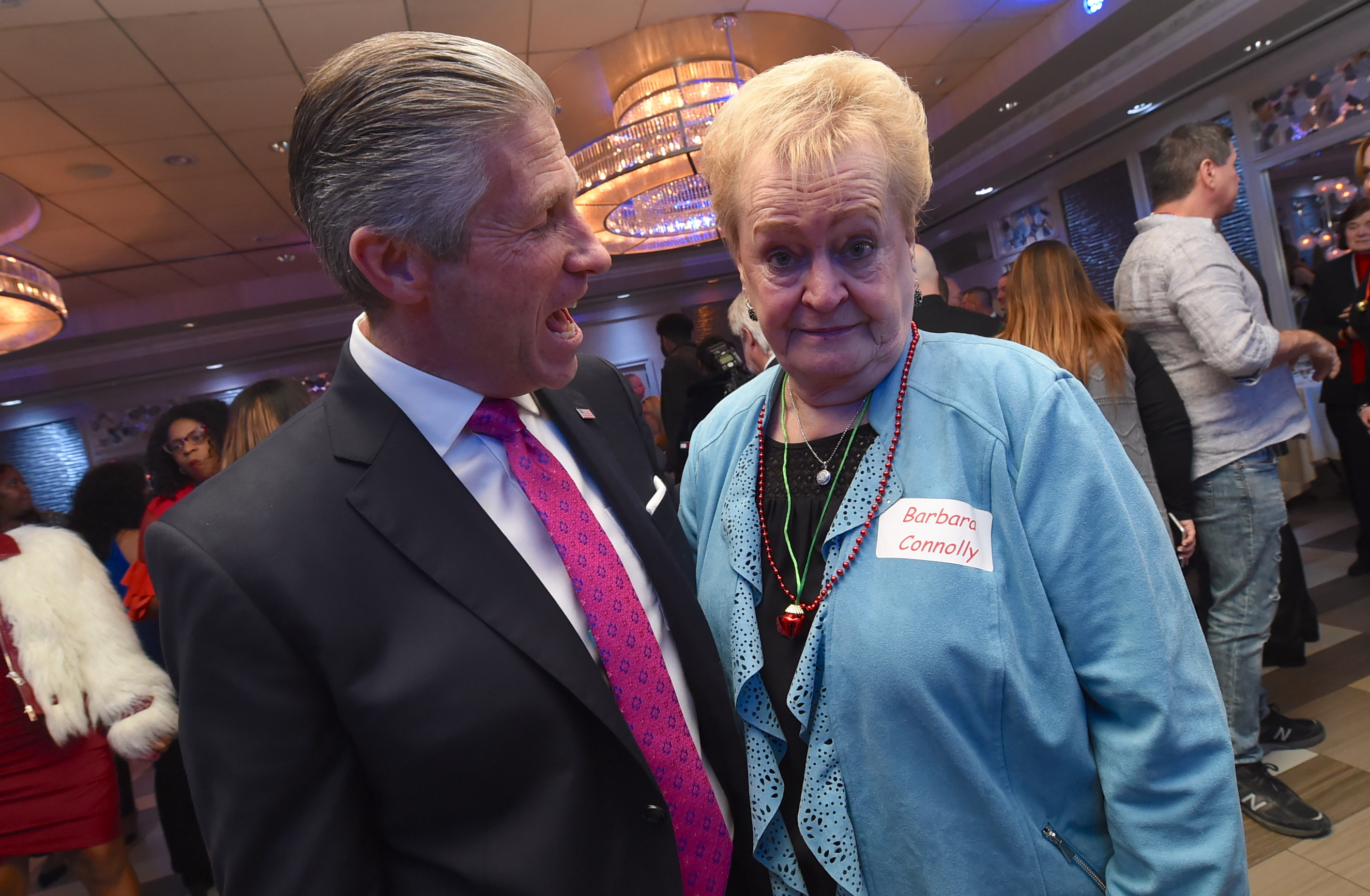 Grace Russell lost her husband, Police Officer Michael Russell, in 1979; he was shot and killed while he and other officers attempted to arrest an alleged shooter. Grace was left with her young son Don and daughter Jessica – but had the help of the PBA and NYPD.

“At first, I didn’t even want to leave the house,” Grace Russell recalled of her grief at the time. She was joined by her two grown children, both married and with their own children. “You see the officers and you identify with them, and it makes you feel so much happier that they are there for you. Both my children are now productive members of society – they didn’t become victims because of the support we received from the PBA and the department.” 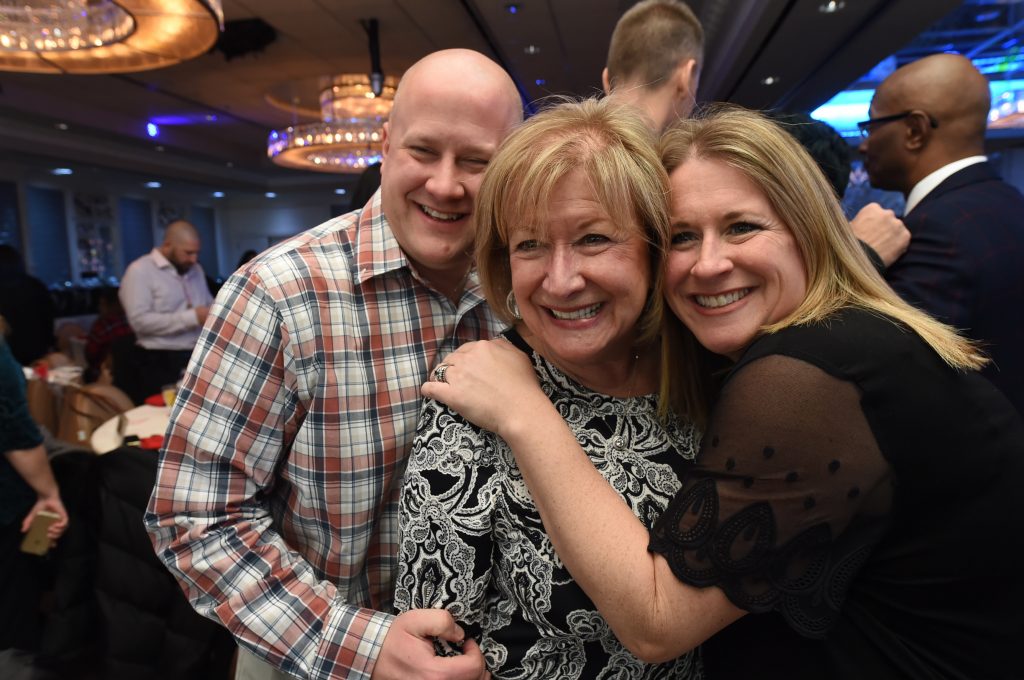 The Patrolman’s Benevolent Association celebrated the holidays with the widows and children of cops killed – and were joined by Grace Russell and her children Don and Jessica. (Photo by Todd Maisel)

Lisa Tuozzolo stood watching with her son Austin, as Ryan Lemm — son of the late Detective Joseph Lemm, killed in 2015 by a suicide bomber in Afghanistan — got up on a police horse at the event. Tuozzolo is the widow of Sergeant Paul Tuozzolo, who was killed by a gunman in the Bronx in 2016. 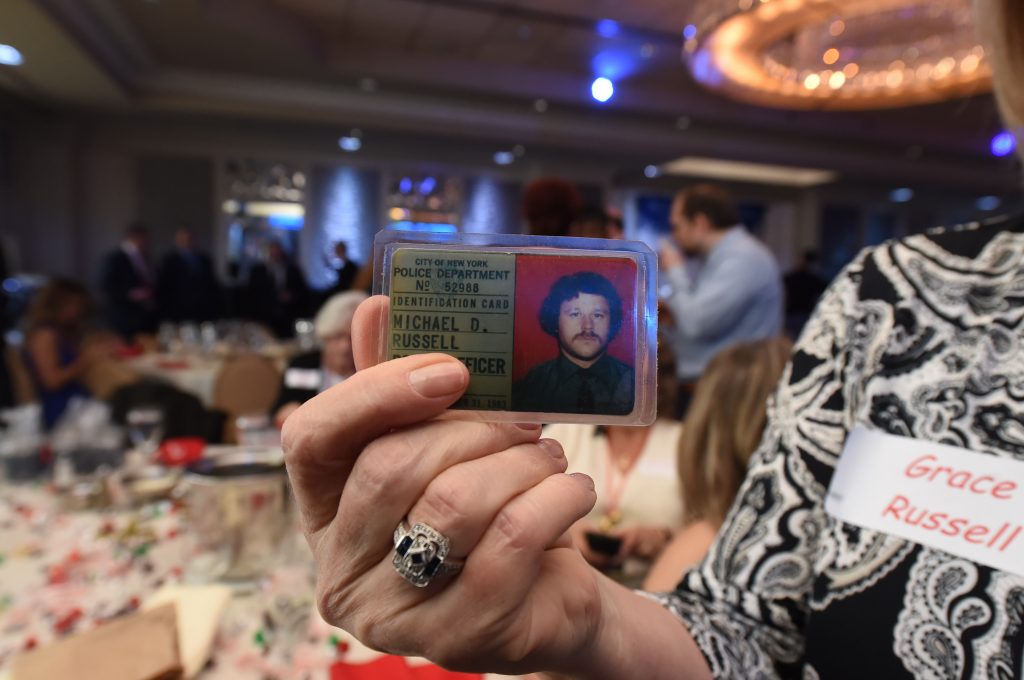 “It’s bittersweet to be here – surrounded by my blue family – officers who currently work in the department and my blue family who have loved ones who lost members of the department,” she said as they disembarked from the police horse saddle. “It is a time to take a step forward, and make sure we are still enjoying life, enjoying the life we still have and honoring the memory of the loved ones we have lost.” 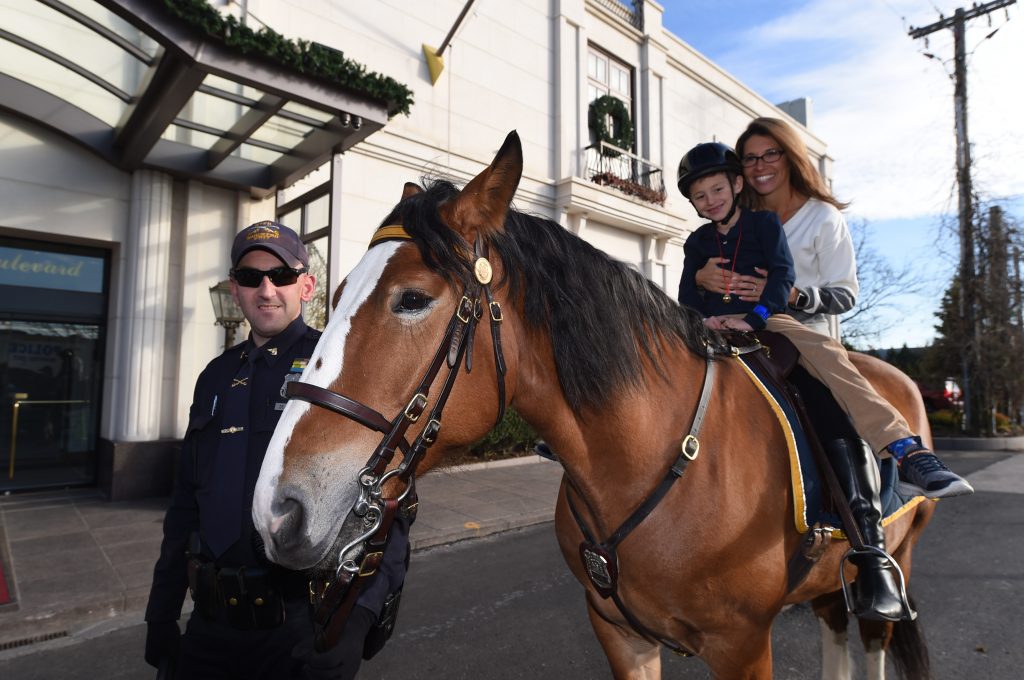 The Patrolman’s Benevolent Association holiday party, Lisa Tuozzolo was joined by her son Austin. She lost her husband Sgt. Paul Tuozzolo in 2016 to a Bronx gunman. (Photo by Todd Maisel)

“This party is a wonderful holiday tradition that brings joy and fun to families who have made great sacrifices for this city,” said PBA President Patrick Lynch. “It’s a day we try to celebrate, but we know that heaviness is always in your heart. It’s not a day about the celebrities who are here. It’s not about the PBA and the brass who attend and helps us to do this. It’s always about you — the families. What makes this day special is that you all come together as a reunion — to see each other, who grew up in this tragedy.”

Lynch noted that while the PBA and the NYPD brass clash on occasion, everyone comes together for the holiday party to celebrate with families whose loved ones made the ultimate sacrifice for the city.

“We all come together – there is no difference and doesn’t matter whether the shield is gold or silver,” he said. “We are New York City police officers and we are here to say thank you to each and every one of you.” 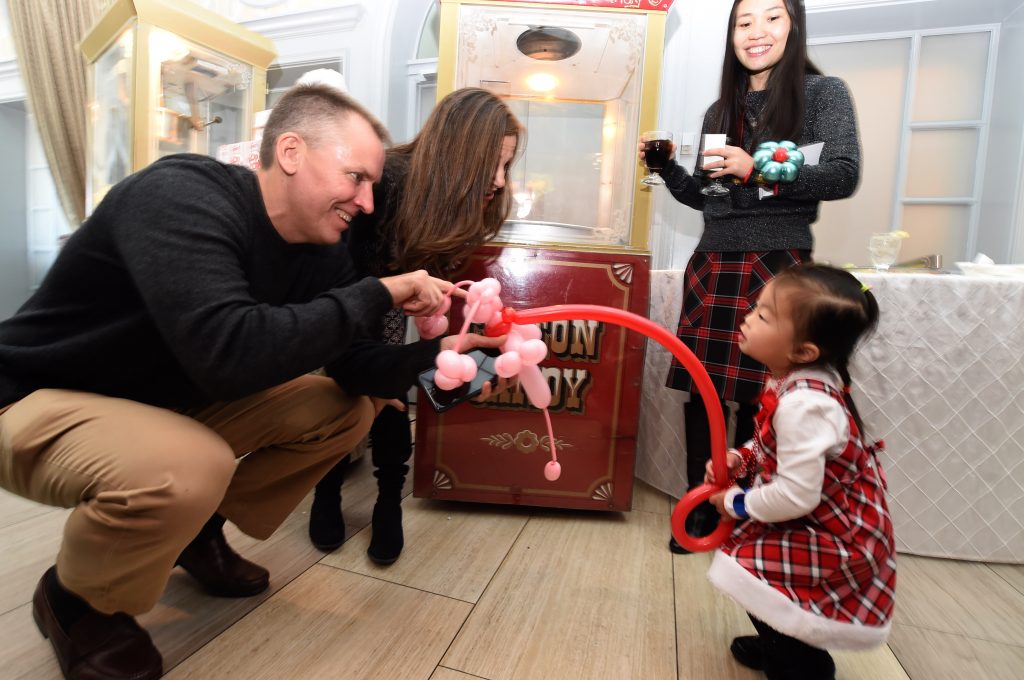 Angelina Liu, born two months after her father Police Officer Wenjian Liu was murdered in his patrol car with Officer Rafael Ramos in 2014, is entertained by Commissioner Dermot Shea and wife Serena. (Photo by Todd Maisel) 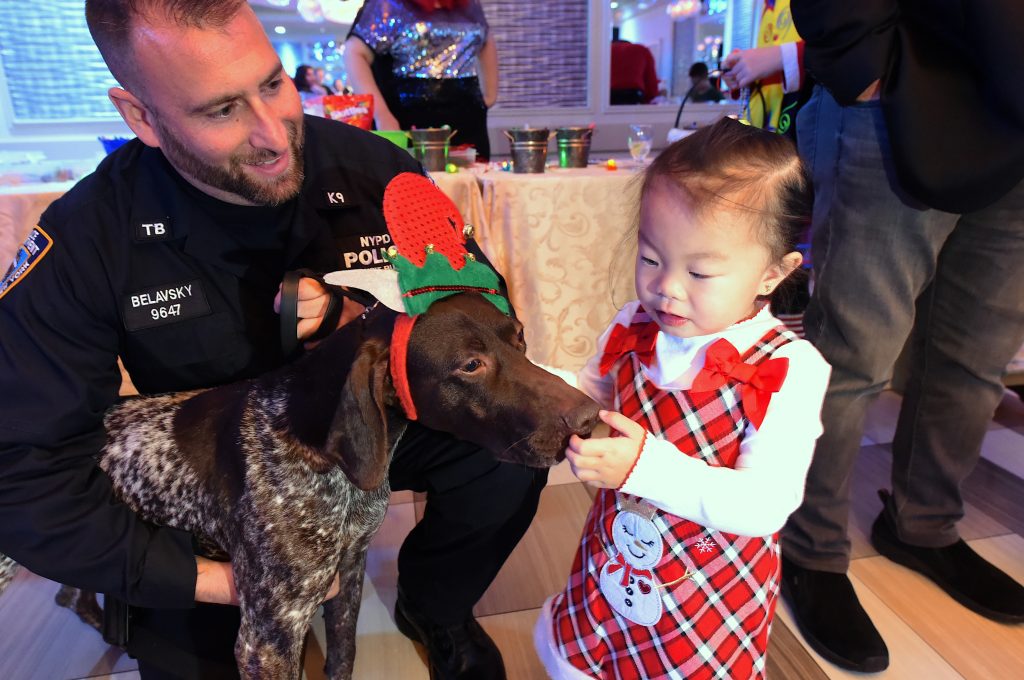