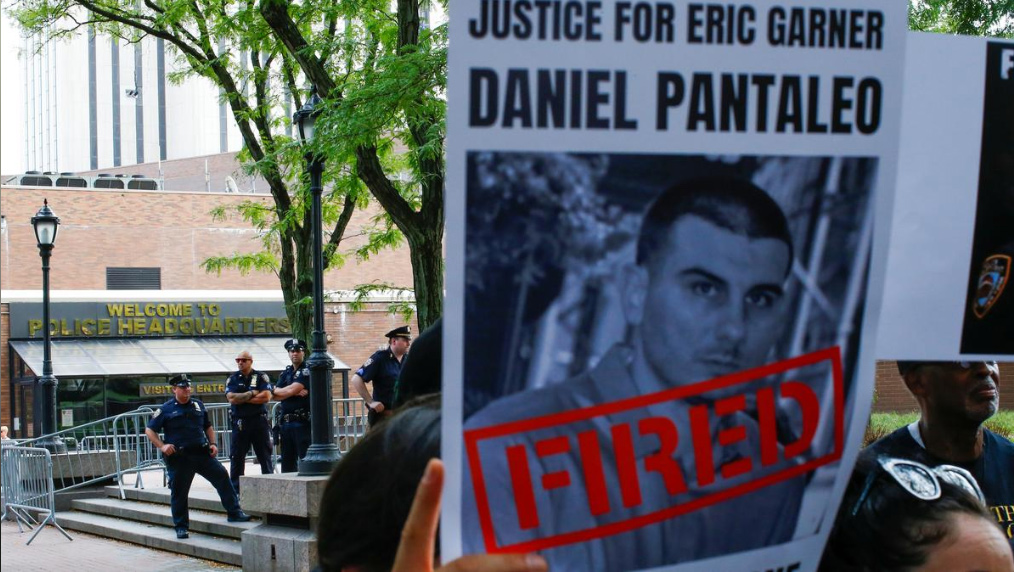 NEW YORK (Reuters) - The white New York City police officer who used a deadly chokehold on Eric Garner during a 2014 arrest was fired on Monday, five years after video of the encounter fueled nationwide protests against police brutality.

Daniel Pantaleo, 34, was fired two weeks after a department judge found him guilty of reckless assault for using a banned chokehold while trying to arrest Garner, an unarmed black man, on suspicion of selling loose, untaxed cigarettes.

Garner’s dying words, “I can’t breathe!”, on a Staten Island sidewalk became a rallying cry for the Black Lives Matter movement that aimed to call attention to police killings of unarmed black people.

Police Commissioner James O’Neill announced his decision to accept the judge’s recommendation and fire Pantaleo at a news conference on Monday.

He spoke at length in unusually emotional remarks, saying he had empathy for Pantaleo, who had been following orders from his supervisors to crack down on loose cigarette sales, and that he expected police officers would question his decision.

“I’ve been a cop a long time, and if I was still a cop, I’d probably be mad at me, I would, for not looking out for us,” O’Neill said, referring to more than three decades he served as a uniformed officer.

Pantaleo’s use of a banned chokehold on July 17, 2014, even if only for a few seconds, meant that he could no longer “effectively serve” as a city police officer, O’Neill said.

“In this case, the unintended consequence of Mr. Garner’s death must have consequences of its own,” he said.

Garner’s family and civil rights activists said the decision was long overdue. The head of the powerful city police officers’ union decried what he said was a politicized firing that left officers feeling abandoned.

“It is absolutely essential that the world know that the New York Police Department is rudderless and frozen,” Patrick Lynch, president of the Police Benevolent Association, told a news conference, standing in front of a department flag that had been symbolically inverted. “The job is dead,” Lynch said.

He sent a letter to union members telling them to adhere closely to the patrol guide and avoid making arrests until a patrol supervisor has been summoned to the scene unless there was a threat to life and safety.

Mayor Bill de Blasio, a Democrat, had long sought to distance himself from the case. Criticism over how long the process has taken nonetheless dogged him as he campaigns around the country to be the Democratic party nominee in next year’s presidential election.

“There was a fair and impartial process and justice was done,” de Blasio told a news conference.

At a news conference uptown with the civil rights leader Al Sharpton, Garner’s daughter Emerald wore a T-shirt with “MURDERER” emblazoned across the front.

“Officer Pantaleo — well, now I can say ‘Daniel Pantaleo’ — is a murderer,” she said. “I wear my emotions on my sleeve and now I wear it on my chest.”

Garner’s family have been frustrated that Pantaleo never faced prosecution and say other officers and supervisors involved in the arrest should also be punished.

“Pantaleo, you may have lost your job, but I lost a son,” Garner’s mother, Gwen Carr, told reporters outside the police department’s headquarters in lower Manhattan.

A grand jury in Staten Island declined to indict Pantaleo on state criminal charges in 2014. The U.S. Department of Justice examined the case for years, but announced in July it would not prosecute Pantaleo, saying there was not enough evidence that he breached Garner’s rights.

In 2015, New York City paid a $5.9 million settlement to Garner’s family to avoid a civil lawsuit.

Pantaleo himself has not publicly discussed the arrest, and his whereabouts on Monday were unclear.

“He’s away now, and I told him to stay away,” Stuart London, Pantaleo’s lawyer, told reporters, without elaborating. Pantaleo would challenge his firing, London said. “Obviously, he is disappointed and upset but has a lot of strength.”