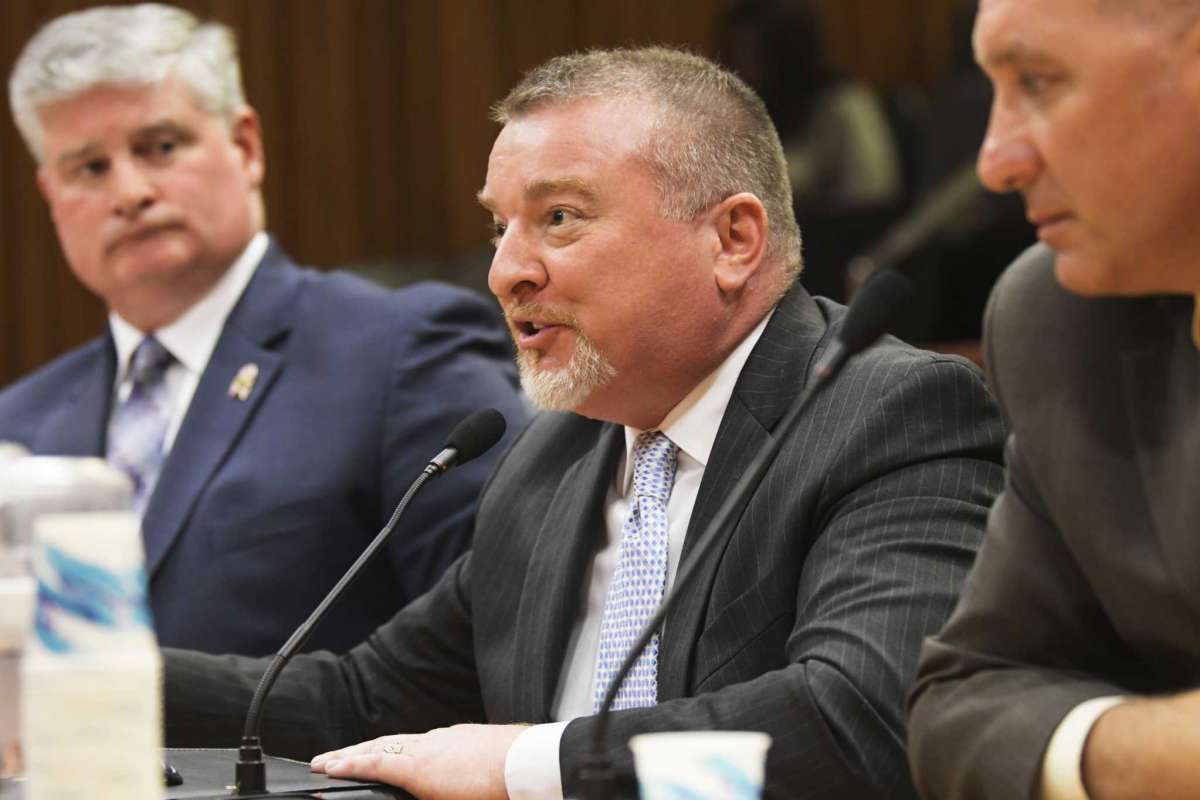 Michael O'Meara, president of the New York State Association of PBAs, testifies during a public hearing on 50-a at the Legislative Office Building on Thursday, Oct. 24, 2019, in Albany, N.Y. (Paul Buckowski/Times Union)

ALBANY — Police union leaders squared off with advocates seeking greater transparency from law enforcement during a legislative hearing at the Capitol examining a 43-year-old statute that has blocked public access to records on internal investigations and alleged misconduct by officers.

Thursday's hearing, chaired by state Sen. Jamaal T. Bailey, followed a similar proceeding last week in New York City that has put the controversial issue on course for review by the Legislature when lawmakers return to Albany in January.

Bailey, a Democrat from the Bronx, has sponsored legislation that would repeal the statute, known as "50-a" for its section in state Civil Rights Law.

"I think that before we can ask people to vote on something I have to be able to inform them, and this is one of the ways that I'm attempting to do that," Bailey said this week about the hearings. They are the "first time that all of these folks are in the same room; I find myself being a consensus-builder. ... We should be able to have a peaceable conversation and I think this is the beginning of having a conversation."

Michael O'Meara, president of the state association of police unions, was flanked by three other labor leaders — including for the State Police — as he outlined concerns that access to police disciplinary records could expose officers and their families to safety risks and result in the release of any complaints about them — even unsubstantiated ones — in open courtrooms.

"We don't want to get publicly flogged," O'Meara said. He claimed that, without the statute's protection, someone could access a police officer's personnel file and "tell everybody in the community."

Richard Wells, president of the Police Conference of New York, cited similar concerns and asserted that even unfounded accusations against officers would remain forever in their personnel file and could be "thrown up in your face" if, for example, they were "testifying at a DWI trial 10 years later."

Assemblyman Daniel J. O'Donnell, a Manhattan Democrat and former criminal defense attorney, pushed back against some of the claims made by the police union leaders, noting that judges in court proceedings would not allow irrelevant or unsubstantiated allegations against an officer to be aired in a public courtroom.

"Your testimony seems to give the impression that a defense lawyer can ask a police officer any question they want," O'Donnell said. "That is not true. ... There are strict limitations on that information."

Diane Kennedy, president of the New York News Publishers Association, and Diego Ibarguen, an attorney for the Hearst Corporation, which owns the Times Union, testified about the difficulties that news organizations face due to the blockade that 50-a has created for journalists seeking to report on allegations of misconduct by police and correction officers. Firefighters are also protected by the statute, although they rarely testify in criminal proceedings.

"Its expansion has drawn an opaque curtain over a category of records which are of vital public interest," Kennedy told the panel. "Trust in law enforcement is eroded when the law serves as a closed door behind which government agencies secretly handle allegations of abuse of authority."

Kennedy cited several examples in which New York newspapers have been unable to obtain details on internal police investigations, even for incidents that had taken place in public and were captured on video.

Ibarguen cited several instances in which police agencies, including the Troy and Albany departments, had wrongly used 50-a in an attempt to prevent the disclosure of records related to internal investigations that courts later found should be made public.

One case from more than a decade ago involved a four-year legal battle by the Times Union to obtain the names of more than three dozen Albany police officers who — with the blessing of a former assistant chief — had used their department's official letterhead to purchase machine guns for personal use by falsely claiming the weapons would be used in their official duties. That method of purchase also enabled the officers to avoid paying taxes on the gun purchases.

The state Court of Appeals eventually ruled unanimously in favor of the Times Union and ordered the department to turn over the records, which were tags with names of officers that had been placed on the machine guns as they were recovered during a secret internal investigation. The Albany department had argued the tags were "personnel records" although no officers were disciplined in that case.

In a more recent case, a federal magistrate ordered attorneys for the city of Troy to turn over a copy of an internal affairs report to the widow of a 37-year-old man who was fatally shot by a patrol sergeant in 2016. The city, citing 50-a, had claimed they were not obligated to disclose the existence of the report to the attorneys for Cinthia Thevenin, who filed a civil rights lawsuit three years ago against the city and the sergeant who shot her husband.

The internal report, which was hidden from the public and the Troy City Council, recommended sustaining four disciplinary charges against Sgt. Randall French, including unjustifiable use of deadly force and lying about the circumstances under which he fatally shot Edson Thevenin. A federal magistrate admonished the city for its legal argument, noting 50-a is not applicable in a federal court proceeding and said the document should have been turned over in pre-trial discovery.

Ibarguen told the legislators that Troy's attempt to wrongly use 50-a as a shield against disclosing the findings of their secretive internal investigation is "hardly unique."

At both legislative hearings, lawmakers cited a 2016 Times Union article that looked at the origins of 50-a. The legislation was never intended to block public disclosure of records on police misconduct, including documented criminal behavior, according to former state Sen. Frank D. Padavan of Queens, who sponsored the legislation 43 years ago.

Padavan, who died a year ago, was a Republican state senator from 1973 to 2010. In the interview three years ago, he said, "If the law is being misused, then obviously an amendment might be in order."