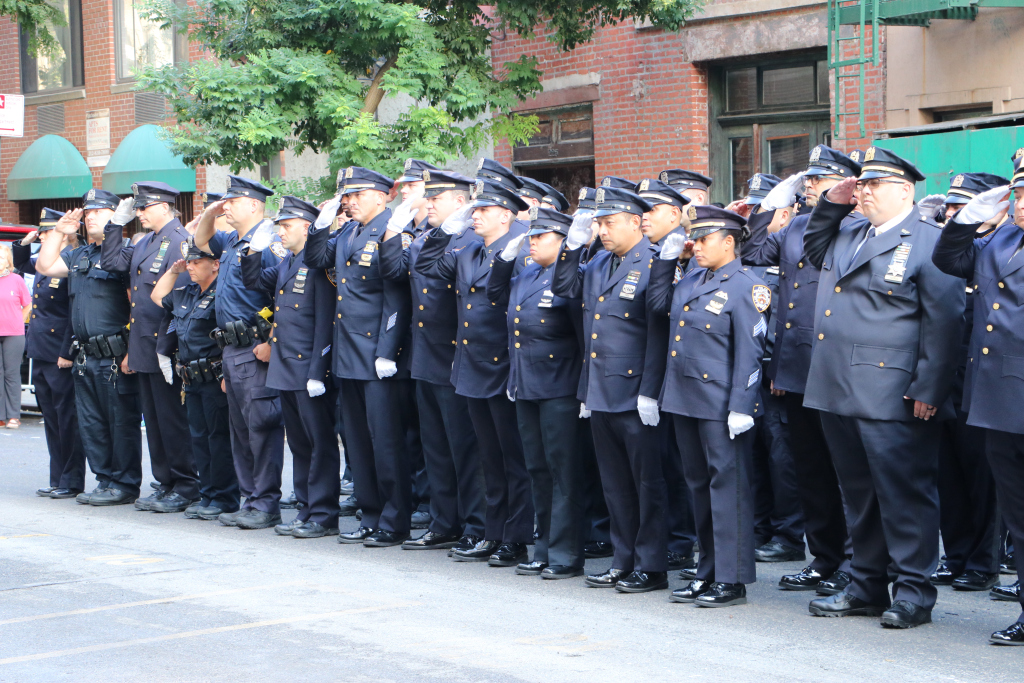 Officers stand at attention during the memorial for the 18th anniversary of the terror attacks on the World Trade Center in front of the 13th Precinct on East 21st Street on Wednesday morning. (Photos by Maria Rocha-Buschel)

Speakers emphasized the ongoing effects of 9/11-related illnesses on members of law enforcement and first responders during the 13th precinct’s annual remembrance ceremony of the 2001 World Trade Center terror attacks this past Wednesday.

Gramercy Park Block Association President Arlene Harrison, who assisted the 13th precinct in the aftermath of 9/11 and for months following, noted that more than ten times the number of NYPD members have died from 9/11-related illnesses since 2001, compared to the 23 NYPD members who died on the day of the attacks.

“Eighteen years later, hundreds of first responders continue to die on a regular basis of 9/11 related illnesses. Here are the numbers of the second tragedy that continues each day,” she said. “There were 400 toxic chemicals at the site. The number of first responders and survivors enrolled for monitoring or treatment is nearly 100,000. All the families ever ask is that we never forget. We can continue to honor those who died that day by being the ones who remember. It’s the very least we owe to the victims and the families they left behind.”

Patrick Lynch, President of the Patrolmen’s Benevolent Association, emphasized that many members of the NYPD have died from related illnesses and many others are currently suffering. 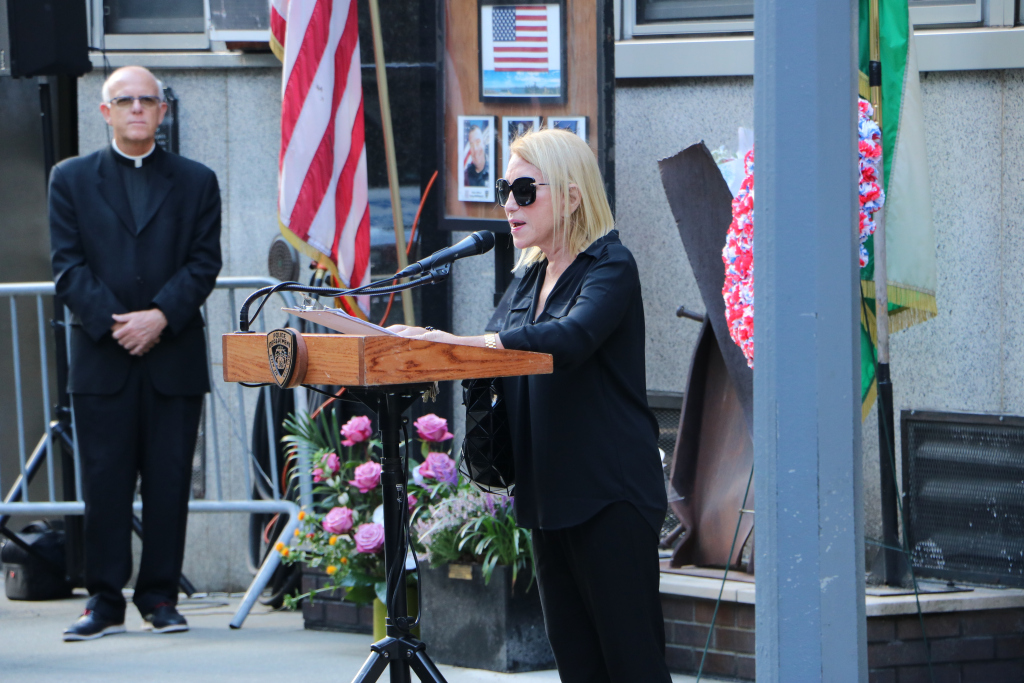 “Many times, it does feel like it’s yesterday,” Lynch said. “For police officers who struggle with the illnesses from September 11, it was yesterday. There was no September 12. They’ve been struggling each and every day, until this very moment, there is a police officer wants to stand at attention on this street but can’t because their job now is to sit on the couch and try to breathe.”

Congresswoman Carolyn Maloney also marked the anniversary by praising this year’s passage of legislation that she sponsored to make the Victim Compensation Fund for those with 9/11-related illnesses permanent.

During the remembrance ceremony, the 13th precinct also honored Police Officer Glen Pettit, who worked in the video production unit and died attempting to help firefighters rescue victims who were trapped in the World Trade Center. 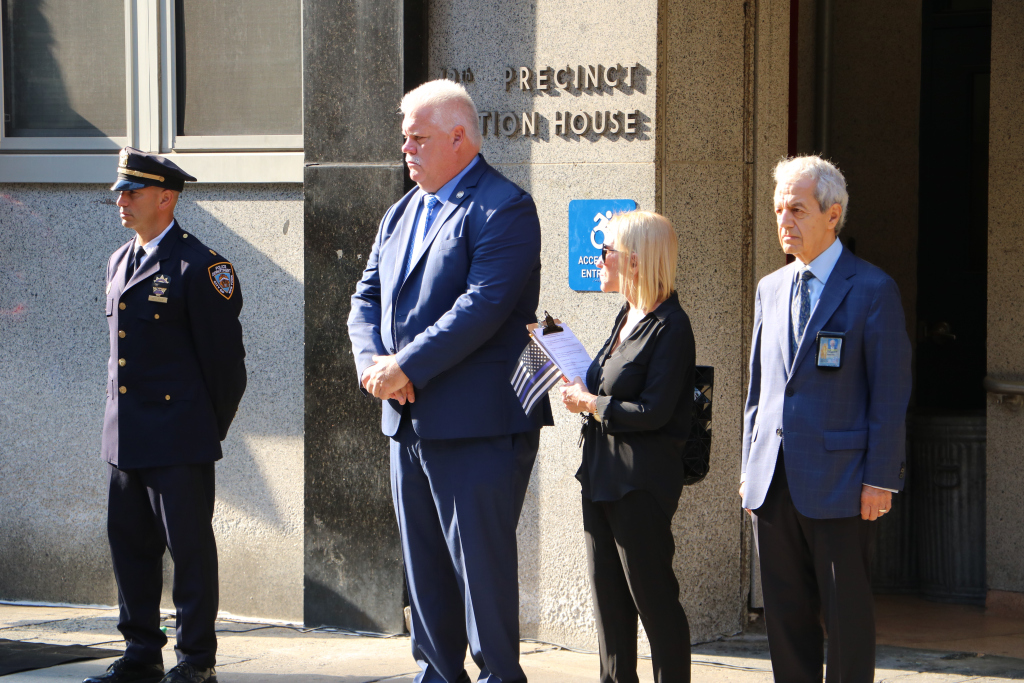 Tony Lopresti, who was the director of video production for the NYPD and is now retired, spoke about Pettit’s service during the memorial service at the 13th precinct. Video production develops videos for internal/external communication and training in the police department and in 2001, was housed in the East 20th Street side of the 13th precinct, where the police academy building is. Lopresti said that the department had a long relationship with the precinct because the command would provide officers for the department to use in training videos and the precinct was always very accommodating. 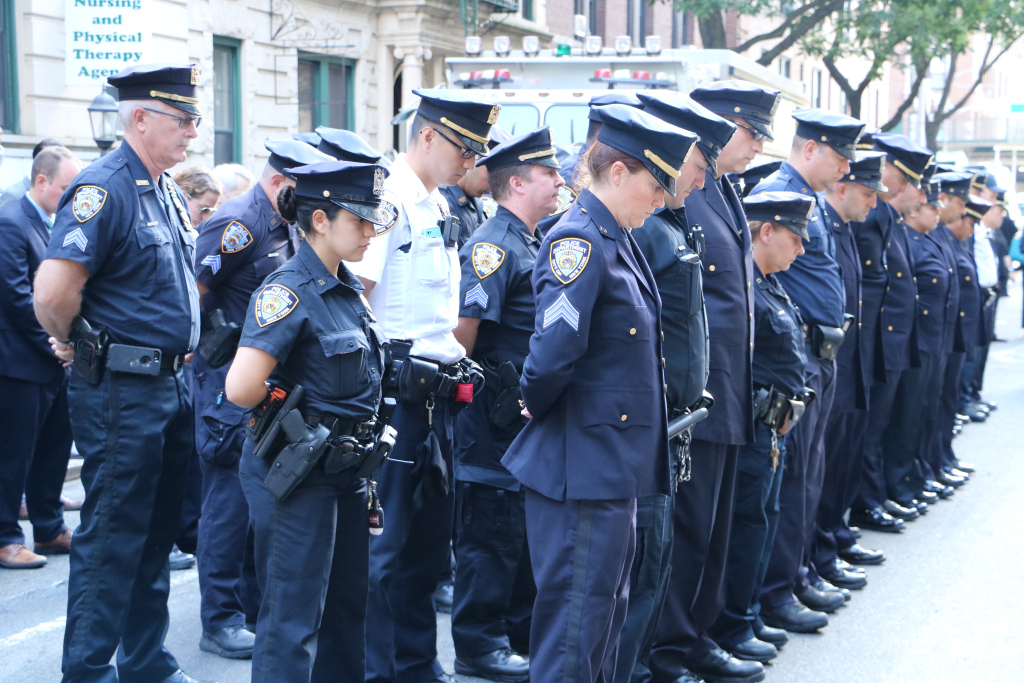 Officers at the 13th precinct observe a moment of silence on Wednesday.

Lopresti told Town & Village that video footage was discovered later of him following firefighters into a tunnel underneath the plaza while trying to rescue victims that were trapped.

“Two other members of our unit went in with him and they survived, but unfortunately, he did not,” he said.

Lopresti said during the ceremony on Wednesday that Pettit was a volunteer firefighter in addition to being a police officer and news cameraman.

“All the instincts of those three professions are to run toward, never to run away,” he said. “That’s what’s so profoundly impressive about the call to serve, the call to protect. I remain honored to have had a role in telling that story and in shaping some of the visual training for that story. Today, the women and men of the department continue to dedicate themselves to others. There is no greater calling.”